Spartacus has tipped into the second half of the season, so far we’ve seen factions develop, key characters perish and a huge boost in armies from Glaber and Spartacus as they get ready to wage war on each other. It’s been a rough ride as tragedy and huge losses set back both sides, today though we get some movement and kick this show toward a heated wrap up. 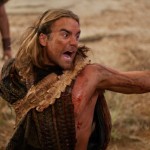 Argon leads a small party to their first major group expansion, no longer picking up small numbers to their cause, they hit their first strike of slaves destined for the arena who have their own desire for Roman blood. There are doubts that quickly rise up but they’re set aside for the simple fact that their group has just gained a massive increase. As they return to camp it’s a mixed reaction of enthusiasm and speculation on where this could lead the group, the story lays this skepticism on a bit thick leaving you just to wait for something to pop up.

Gannicus is left to fend for himself after leaving Spartacus, wandering back to the streets to seek payment and wine to fuel his guilt and inner struggles. His weakness strikes a critical blow as those in the city become aware of him after the games. With many thinking him dead it’s odd that he pops up unharmed days later from the aftermath when surely he would have been noticed before. Unfortunately too many put this together and seek to put him back into chains similar to those that held him bound to the empire before. While he may be free, he fails to realize there’s a greater cost to it than the lives that he took to earn it. His struggle brings him to his own resolve finally and it will shape the tide of battle greatly.

The Romans aren’t sitting idle either, Glaber’s recent adventures in murder bring another shift to the group as no one is the wiser to Seppius being murdered by his new recruits. Glaber quickly merges the men of Seppius into his own fleet to form a new brigade hoping to hunt the rebels like dogs, selling the murder of Seppius as a betrayal by his own slaves in the name of Spartacus. As a result he also goes on a crucifixion spree for anyone who utters the name of Spartacus, making example of his own servant woman in front of the whole crowd.

Ilithiya takes distress at this news, she also fears for herself being stuck by the side of Glaber in all of this, it doesn’t take long for her to seek aid with Lucretia to form a plan for them to leave. Unfortunately Asher’s encounter with Lucretia before was not a single affair and has kept itself going since the story left off, as a result the duo are focused on a similar objective again. Desperate planning strikes Glaber in one of his few vulnerabilities anymore and just as the pair look to brighter paths… Ashur sweeps one of them back into the fold. 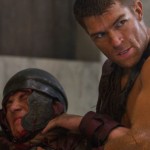 Overall Sacramentum brings continued back story to the characters, much of it centering around Gannicus and his own struggle for where his own loyalty rests. We also see some of the darker sides of everyone in this show and realize that Agron’s people while not Gauls have their own share of problems they bring to the table and should not just win rapid favor. Spartacus Vengeance goes to a whole new level in many ways with episode 7 including a level of violence that had me at a pause. Is it too much? It’s hard to say but the single act tells everyone who they should absolutely not mess with.