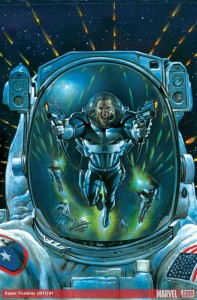 Frank Castle tends to do a bit of everything on Earth so why not in his latest adventure take him off the planet for a while? At WonderCon this weekend, Marvel did exactly that, this summer The Punisher is going off planet and in a unique story plot separate from the current universe that he resides in so there’s no conflicts, for those scratching their heads I would say think of it as a four-part “What if?” series.

Space Punisher starts with Frank Castle already in space, he’s not hunting Kingpin over to Mars he’s actually fighting a new threat out there called the Six Fingered Hand. Of course we’re not getting too Sci-Fi it’s just the number of people who need to go down. They’re a space mafia of course and in this timeline they’re the ones responsible for the death of his family. Talk about making it easy to get him fired up all over again, too bad they bring back some classics in this new space mafia to make that retribution hard to earn. Word is Magneto, Red Skull, Ultron and more are also related to the group.

The stage is an experimental one and it seems depending on what the fans say and the sales say, we might see this explored a bit more. Of course to do that they’ll also test the waters with cameo appearances by The Hulk, Deadpool, Sabretooth and more.

Spider-Man takes the other half of the news cycle with an announcement of him going head to head with The Rhino in Amazing Spiderman this June with “No Going Back”. The aim of the story takes a different path though, they want a chiller hitting the fans, something that brings the horror out for once and gets to the readers in each chapter in the story.

Some comments from the author:

“In Zeb’s “Shed” [story], The Lizard won his inner-battle against Curt Connors,” Slott reminds readers. “Curt Connors is dead. Curt Connors is no more. The Lizard is all that remains. When The Lizard killed Curt’s son, Billy, there was nothing more for Curt Connors to lose. It’s all gone. He’s lost his wife, his son, his humanity, his soul. From that moment, there was ‘no going back.’ Or is there?

Biggest inspiration is that after a major shift on Earth, Spider-Man starts acting a bit different and we get a glimpse of the breakdown and how his own priorities have changed and now instead of having someone to save he’ll be looking at himself for his next challenge.

For more information check out the official release from Marvel:

Space Punisher | Spider-Man “No Going Back”