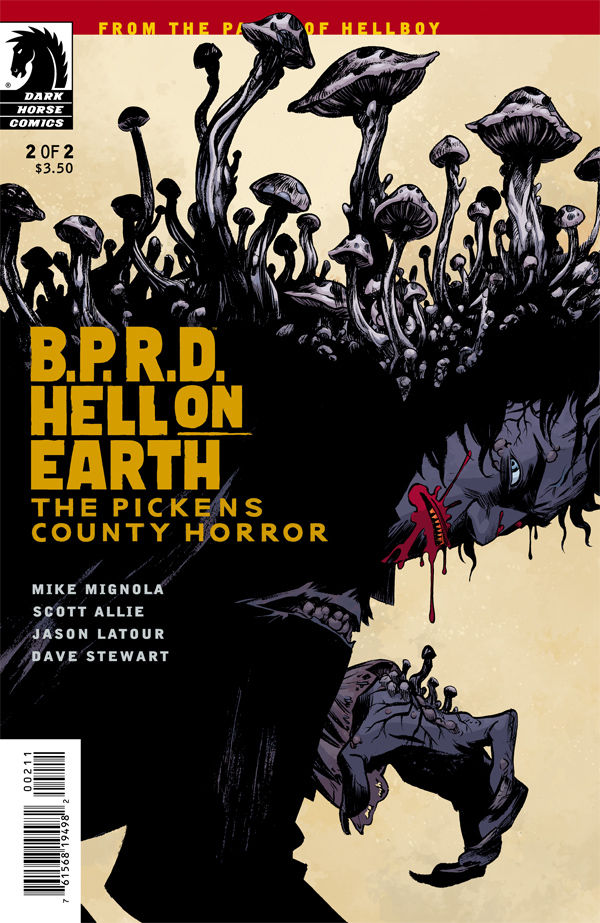 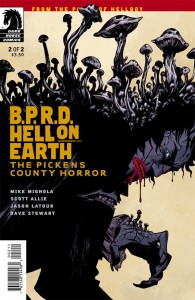 Peters and Vaughn left us hanging as fog, vampires and the undead rise up in what was set to be a routine investigation. As trouble strikes they’re put out of the game and taken to a safe house in the middle of it all, the owner of which is a vampire conspiracy theorist researching a possible invasion scenario. Part 2 starts up without hesitation, the fog is thick and the crosses are all over with something lurking in the background, Vaughn is quiet but worried about Peters and we step into the mess from there.

Pickens Country Horror is a relentless book, even with all the experience Vaughn has the story proves once again that he’s only seen a fraction of the horrors possible in the outbreaks so far. His confidence no matter how high is knocked down as the situation with the fog and the mushrooms grows worse, it’s a bad time to be an agent of the B.P.R.D. on this mission. Unfortunately as a mini series we’re whisked through the rest of the development including the history on the vampire group at work locally and their history. It’s not to say this has been a bad installment but the closure on it really shakes the foundation as a newer reader to the series, I can only hope this isn’t the end of this arc and that it spins into something more. One thing that Mike Mignola does without trouble is develop character attachment and #2 is where you really wish this wasn’t the case because of how much whiplash fills the pages of the story.

If you’re a fan of B.P.R.D. this is a must have to your collection for the series, you have vampires, crazy supernatural fog and a crazy man telling you his end of the world conspiracy theory. If you’re a new reader, it might be a bit of rough ride to get into even if it does have a very interesting story, it just has a really rough closure that could throw off those new to the series even if the 2 issues are excellent reads. The art from Jason Latour is great, the expressions and body language don’t drop the experience while reading through it, even when going to supernatural levels the experience holds the reader in and even brings a bit of paranoia, with Dave Stewart assisting in color it’s really an immersion experience.