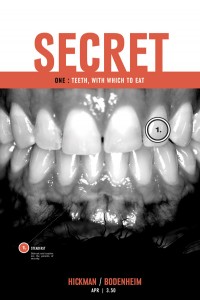 Secret is a new property hitting the Image Comics line, taking a detour from the supernatural to the dark world of private security, government secrets and pain. The last one is a bit odd to mention but SECRET packs so much of it in the panels that it’s hard to neglect including it.

The story is simple as Image Comics points out

A man gets shot in London, a law firm gets broken into in Washington, an accountant gives away the password to his computer, and something put to sleep 20 years ago awakens. What is the unsavory relationship all these things share, and how could it bring down two of the largest governments in the history of the world?

Scratch that, it’s not simple, in fact the description doesn’t even touch how down and dirty this first issue gets in the first pages. Woken in the night on his secure compound, Mr. Dunn is assaulted but it’s not a thug, in fact it’s no ordinary encounter at all… the ordeal is an execution of power not a negotiation or a plea or even a demand. A man broken to his very core by a systematic collector on a mission from a higher power is what transpires in only the first pages. This sets the tone for SECRET and it’s a very high level atmosphere as Dunn has his life shattered in a simple series of events by an unknown that has only the vaguest request.

SECRET moves forward from there, what is an entry-level problem grows quickly, the exchanges are quick full of information, the dialogue building toward a conspiracy or threat that can’t even be identified and so the hunt is on not just for security but to neutralize the problem from coming again. In the corporate world for this comic these deals are not so direct, in fact it all comes down to memos, blackmail and exploitation to make a point. Mr. Dunn no doubt still shaking from his encounter skips ahead of all this in favor of dumping the baggage onto a third-party without much forethought just that he doesn’t want to run and even if he did where would he even hide.

It’s a unique story to have in a world of super heroes and zombies right now, while those are good in their own respect it’s always nice to have some wider variety out there and SECRET gets it done with a sense of style and classic appeal. Artistically it’s a special read for me, it takes special effort and considerations to maintain such a monotone palette and successfully engage and drive a reader in a comic. Ryan Bodenheim and Michael Garland get this done by using creative levels of contrast throughout the book to define focal points even when there isn’t a direct clash. The read is very driven by contrast and you feel out the key players and gestures based on the intensity. Anyone looking for some variety of a darker kind in their collection would do well to include SECRET in their next trip to the store or online order.