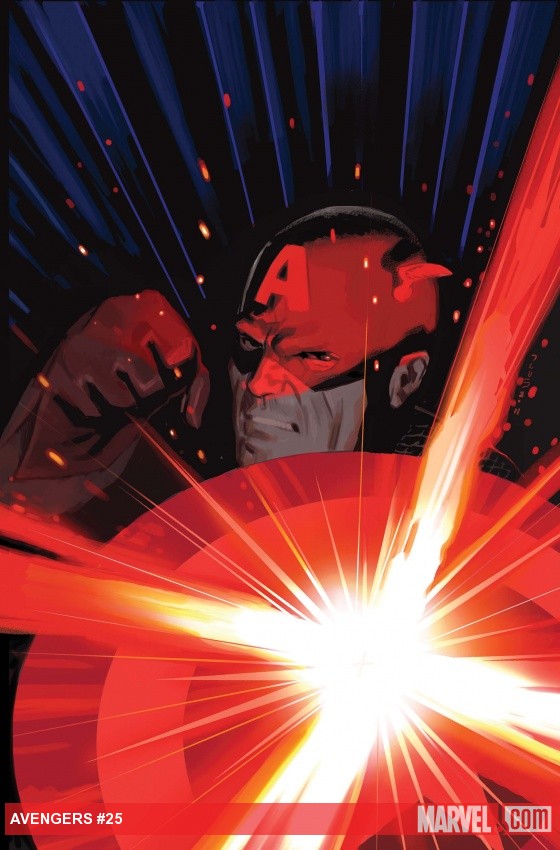 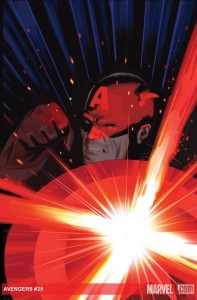 Avengers vs X-Men spills into the pages of The Avengers #25, the fight is on and then we shoot back into the memories of Captain America. Unfortunately yes, we’re in another back story sandwiched between minutes of the fight breaking out. This isn’t to say it’s irrelevant in the story though, in fact it’s a chunk of a huge story panning out for the arc . We’re given a glimpse at Captain America in this struggle, it’s not one he’s all that accustomed to though, he faces issues of public perception and doubts in his own mind about his ability to deliver. No one ever said being the face of a super hero group would be easy though, even his allies remind him of that as he wishes for that one move to put them back in the good grace of the public.

Issue 25 takes us into the heart of Cap’s doubts and desires to deliver a win for the people, with the help of his fellow Avengers and a streak of luck delivered by Noh-Varr they take on a piece of the puzzle that delivered such a heavy blow to the image of the Avengers. With swift action and coordination Captain America is able to relive the good moments of this job, tackling A.I.M. and renewing faith in his team to protect the world in a way they only can. It’s a deep side story that really drives off from the Phoenix issue at hand, that is until the end of the issue and then you find out yet another interest rests under the surface of this conflict. Who else in the Avengers will develop a new agenda as they come to this fight and how will it spiral out for the team?

For those hoping to see a dramatic battle in Avengers 25, you’ll get one but it will not center around the X-Men, instead the focus shifts over to A.I.M. and it’s an important step to introduce a greater issue at hand. It’s a shame to see so much back peddling but understandable given where this story is directing itself, what was originally a battle to save the Earth from the Phoenix force is now developing into a galaxy wide battle to control it. We’ll have to see how well they can keep it together when they start to wonder who they can really trust.

Outside of the story, the rest of the issue is a good read, although I still struggle to see why Thor came off so odd, his face almost too flat to imagine as he flew in to lend a hand to Captain America. So much of the book went fine minus that moment and it was so large of an exposure that seemed to never repeat itself after the fact.