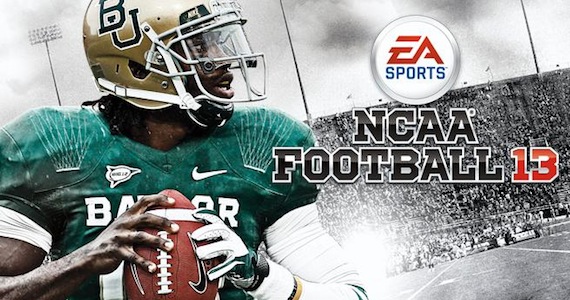 Summers almost here and that means another year of EA’s College football with new gameplay ti wicks and promise of more improvements EA plans to step it up for the new year!

Down Below are a list of some changes and new feature that have been made, for more info checkout the NCAA Football 13 website for trailers and screenshots

With a new passing system that changes the way quarterbacks and receivers play and respond, combined with a new read and react defensive AI system, NCAA Football 13 delivers greater realism on the virtual gridiron.

Passing is more important than ever in the realm of collegiate football, and NCAA Football 13 has taken great strides to give users unparalleled control over this element of the game. Total Control Passing allows quarterbacks to lead their receivers into open space, and reconfigured passing trajectories to allow QBs to drop their passes in between layers of coverage without leading receivers out of bounds and while also maintaining a realistic throwing velocity.

Receiver Awareness – All those times when you’d complete a pass well before the receiver completed his route? You’re not going to be doing those as much if EA has its way. This year, the icons over receivers will light up when a player is expecting a pass. This doesn’t mean he’s open. This just means the receiver is looking for the ball. Similarly, you can throw when the icon isn’t lit up, but the chances of a catch are lower. 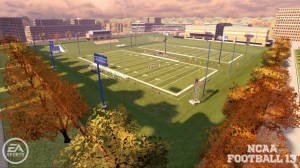 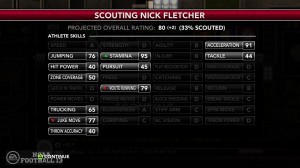 Passing isn’t the only revamped element of NCAA Football 13; pass coverage has been overhauled as well. Gone are the days of “Psychic DBs” and “Super Linebackers,” as the new Read & React Defensive AI system requires defenders to see the ball before they make a play on it. This means defenders will react in a much more realistic manner, only making plays on the ball when they actually see it in the air. Now well-executed pump fakes or play action plays are more dangerous than ever, and defenders who lose track of the ball will be hard-pressed to contain their offensive counterparts.

Studio Updates and ESPN Bottom Line bring you the stories of Saturday, featuring live studio updates from earlier matchups and games in progress. Kirk Herbstreit, Brad Nessler, Erin Andrews and now Rece Davis of ESPN provide authentic and enhanced commentary on all the action. In addition, recruiting now goes deeper than ever with updates to dynamic pitches. For the first time, recruiting grades can change each week based on your performance in Dynasty mode.

Studio Updates will occur dynamically throughout each game, keeping fans up-to-date with scores and news from across the country, just like during game days on ESPN. Rece Davis, the newest addition to the commentary team, will provide players with live updates from the studio throughout each Dynasty game

The implementation of the ESPN Bottom Line ticker will keep fans up-to-date throughout the NCAA Football 13 Dynasty experience, with a new simulation process that now evaluates games being played in real time before and during a game. Priority Score Alerts, Final Alerts and Upset Alerts will be displayed just as they do during game day broadcasts.

The new scouting feature provides fans a detailed experience while scouting a new recruiting class. Starting in the pre-season, each coach will have an allotted amount of time to scout players and determine attributes to unlock their overall rating, gaining familiarity and knowledge about their players’ abilities in the regular season. 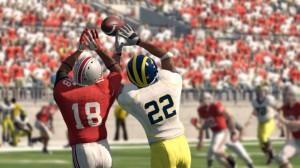 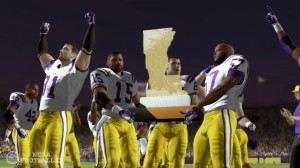 New updates have also been made to the following:

The NCAA Football 13  audio team sent audio directors and designers to more than 20 schools across the nation to capture the energy of game days, recording new crowd chants and stadium buzz. Commentary has been improved with genuine dialogue and unscripted banter between Kirk Herbstreit and Brad Nessler, following a new recording process that blurs the line between virtual football commentary and true broadcast presentation.