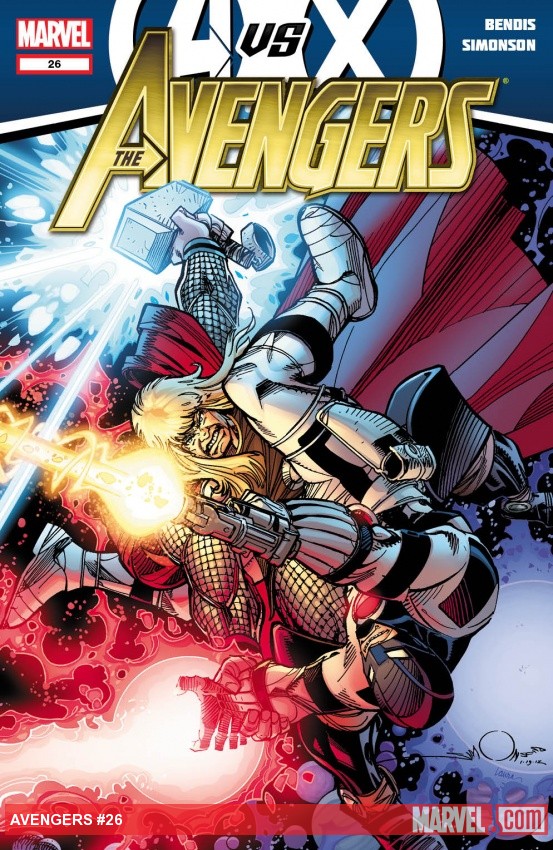 Time for a flashback and flash forward through the AvX universe, Avengers 26 attempts to elaborate on what has been going on in the series so far and it attempts to make some sense of the slaughter from Secret Avengers that we saw a few weeks ago. For those who followed that story, this might not make a lot of sense but it’s something that happens when you attempt to retell what’s already long inscribed into the story.

Captain America needs some heroes that can put it all on the line in a suicide mission, the Earth is in danger and they need to contain or stop the Phoenix if at all possible. He picks a select group of heroes for that task and sends them into the great beyond hoping for the best even though the worst seems inevitable no matter who goes up there. Everyone has a moment to say goodbye and we see some personal struggles to highlight the moment itself, it’s a hard reality that none of them could come back to the planet after this battle.

The story jumps forward to their conflict and dances through the struggle and drama of the battle, in this we see some slight story alterations a massive spoiler skip and a continuation of the battle into a new area that was lost from Secret Avengers, new hope is found from the team and things look incredibly positive until some of the deeper seeded prequel stories start coming into play. As a galactic superpower, everyone wants control of the Phoenix and even the tightest friendships or alliances can’t stop those desires from coming full circle. Betrayal strikes and the team is torn over the moves that come next. Hopefully this extended arc gets more elaboration though, it still fails to connect to AvX #4 directly and it leaves out a huge twist from Secret Avengers #26.

As a retelling, it’s okay and it’s a bit awkward in how it jumps around the existing story that was written, it’s hard to write over what was already said and established in a story. The new twist doesn’t even connect to the existing AvX arc which makes matters worse as we’re left to guess where all these pieces are coming into play and if we’re going to start moving to future stories ahead of the main arc in the same week. In the art area the treatment of many characters is a bit… poor, I look at Thor and Ms. Marvel and even Captain America and wonder what on Earth happened to their faces as the book takes off. The consistency changes somewhat through the rest of the issue but it’s just a hard hit to see characters morphed out as they are.