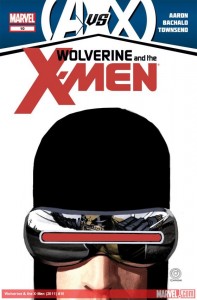 The Avengers vs X-Men drama continues on the side again, this time we’re genuinely branching off from the current story into detailed moments, although the current one doesn’t seem to exactly sync up with the close of AvX #3.  We join Wolverine back at the Jean Grey school with the staff and students catching up on the recent battle at Utopia, the questions are running of who is on the right side and where this is all going for the future and it only gets worse when they look to their doorstep. Unexpected guests are always a good spin for a series, unexpected fugitives are another story, especially when you were fighting all of them just a short while ago in a heated group battle. Wolverine heads to the front to sort out the new guests while tensions stir between students and instructors with their guests getting a bit physical. The book isn’t 100% based on the conflict, we see growing struggles with Angel and the students continue forward and everyone trying to figure out who this new personality is.

Given the past issues it was a shock to see Wolverine and the X-Men #10 taking such a unique detour compared to past installments in this AvX side story, it actually brings unique development that adds to the X-Men storyline and their reinforcements. While Wolverine felt those who joined his school would be there exclusively to his decisions and command he’s met with a hard reality that when it comes to mutants and the X-Men, everyone will follow their own personal beliefs just as they always have. We get a huge teaser in this issue of how the forces will expand and we also see a return of the Death Commandos from the Shi’ar and their clear agenda of destruction no matter who gets in the way. It’s a great lead in for the wider picture building up and helps break it away from just the direct dispute of Cap, Iron Man and Cyclops butting heads.