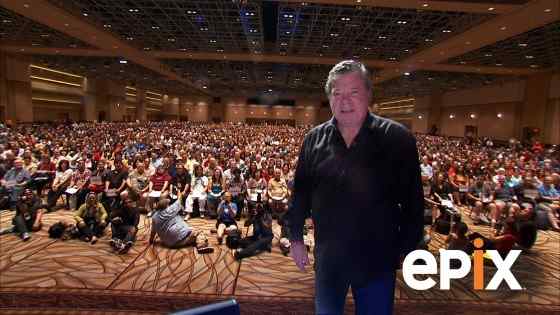 William Shatner’s Get a Life! | Premiering July 28 at 8pm EST on EPIX

Based on Shatner’s hugely popular book, this film examines the mystery, longevity and the cultural phenomena of Star Trek and its long-obsessed fans known as “Trekkers.”  On the surface, the film is an exploration of strangers who have for years attended conventions which looked foolish and almost laughable to some – but Shatner discovers the many secrets and hidden motives behind these individuals’ compulsion to attend these events.  The end result is a film that reveals a fun and touching side of the fanfare surrounding Star Trek, and examines the thrill of what’s happening at these fantasy conventions and the enduring popularity of the film and TV series as Shatner further embraces his role as Captain James T. Kirk and his own impact.

‘William Shatner’s Get a Life!’ @ Comic-Con
Shatner will introduce the EPIX Original Documentary at a screening directly following the panel on July 14th at Comic-Con. The screening is at 7:00PM @ Reading Cinemas.

Attack of the 50 Foot Cheerleader

Roger Corman’s Attack of the 50ft Cheerleader’@ Comic-Con
Corman will introduce the EPIX Original Movie at 3D screening following the panel on July 14th at Comic-Con. The screening is at 12AM @ Reading Cinemas.