Credit to Jackson and Jenny for helping get this covered and out to you guys.

Normally we break our coverage up into multiple days and events and other good items, given our whirlwind experience at AX 2012 we’ll concentrate our focus more on the good times and a massive enjoyable gallery to support it all.

(Also a word of warning, the gallery is over 300 images big, all images are also in 8 MP resolution so you don’t get robbed of valuable pixels to post process, if you don’t want to wait for the images to load in soft box use right-click to save the link as)

All of this tl;dr? – Skip to the gallery 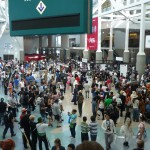 Getting into AX… kind of.

Just as one does not simply walk into Mordor, one doesn’t simply just get into Anime Expo. Each year presents various hurdles of long lines, temporary system issues or other fun things, as pre-registered attendees it was much easier to bypass this general trouble and overall the system and lines were moving so fast that no one was ever locked up once the show got moving. The old days of 3-4 hour registrations are dead with how efficient the show has become.

Unfortunately this is only half the problem for those in the region driving in, this year there was a special treat of the X-Games going on just across the way. Instances like this aren’t that frequent but when they hit they leave a lasting impression, mainly because while sitting in traffic in front of South Hall, it took over 2 hours to move from there to a parking space on the backside of the convention center. Unfortunately the LAPD made getting in to park for both events a nightmare and it took a very stern sheriff in those last 20 minutes to tell the traffic merging at the last-minute to beat it. Better coordination needs to go down with internal staff and the LAPD to make sure that events like this don’t face issues that get this awful. 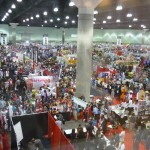 As the market fluctuates so does the general size of this feature of the show, as of the past years it felt as if the show was losing more and more space with vendors and that general variety was stagnating. For 2012 they pushed hard to reach to new avenues of independent markets and sellers and even rare import dealers that one wouldn’t usually see in the US including the official One Piece store which was selling goods as fast as customers could haggle prices with them. It’s no surprise then to see that what fell to a low at the LACC of almost 8 major aisles took a step up and has reached double that in a short span of time while preserving variety and  an entire dedicated wing for Fan Art set apart from that.

Pricing was a bit of a mixed bag, items like plushies felt like they were running on the high-end of the spectrum while figures and other collectibles felt more accessible and it seemed as if sellers were open to deal on those items more than before. It’s never a situation where everyone is going to walk out happy but hopefully with the space rental arrangements it might be easier for them to budge on pricing a bit more. It seems like a yearly staple to expect shops to push $5 manga, $15 plushies and $15 wall scrolls or 2 for $20 with shirts still looming around the 20-25 mark.

It’s not horrible that it’s so predictable but it’s also not a driving force for people to shop on the spot vs online either and I think that’s an influence people actively face still when going to events like this. 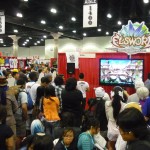 In past years I had a genuine concern about the industry power being invested into AX as a whole, with so many mergers and the rise of SDCC it felt like the attention was going elsewhere with the show and it was a major blow to the fans (not everyone can get down to SDCC and not everyone can swing $175 for tickets). Seeing companies like Viz return brought a sense of reassurance in tough times for everyone right now. Bang Zoom did their classic auditions and demonstrations, AAA showed off all the major goodies coming soon, Funimation touted shows they have out and projects they’re starting on, Namco slammed fans with their biggest related releases coming soon and Crunchyroll kept the crowd energized. NIS was there to hit fans with goods for their favorite products, Aniplex helped showcase all of their recent projects and
attempted to deal with massive traffic overloading their section of the hall.

Overall the support was good given the limited players left in the field, it was good to see Viz make a comeback to the show as well given they were just in the region for Wondercon as well in a smaller capacity. 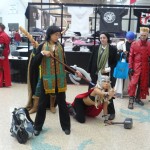 There’s one thing Anime Expo has never fallen short on and that’s the community aspect of the show, between fans there’s not a lot of ice to break and it’s often comforting to know that many there will have an eye out for one another. As the show has aged so have the patrons so it’s a refreshing shift to see photo-op circles staying tight together and organized and giving the security teams nothing to stress over during the show. As the show has cemented itself it seems more and more fans are settling down to socialize and share the experience.

There are quite a few examples of this, Concourse hall played host to waiting lines for events and when inactive the cosplayers and random fans would blast music, dance, play games, hang out and relax in what was essentially a massive living room. On the patio areas there were groups of friends new and old hanging out singing random songs and having a good time while resting their feet in the shade. It’s a refreshing shift from a lot of the conventions on the circuit for collecting and gaming actually. 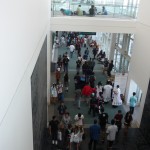 There’s something to be said about the amount of features they run now, while the show doesn’t run videos until the early hours of the morning anymore, they are moving to use more and more of the LACC with feature rooms, industry panel areas and tutorial workshops ranging from drawing to Vocaloid tools. Many of these cater to segments of the community that never found as much of a niche in AX like AMV production, there’s an entire block that ran for a full day on just that topic to be sure they hit the fine points.

Add onto this the return of classics like the gaming tournaments, arcade and tabletop gaming and fans really were just overloaded with events to take on. In that sense the only thing that felt lacking was a steady flow of direction from the AX team to inform people on the fly of what was going on. By this I mean having information available without having to break out a guide-book or pop out their phone (when you’re a cosplayer this is a bit of a problem to say the least). Often people shot through concourse without being aware what was even going on, this isn’t a problem isolated to AX though, it happens even during events like E3. 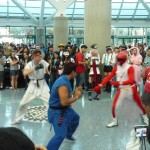 One of the huge sellers at most Anime conventions is the huge response from the community to dress up as their favorite characters from their favorite timelines in a shows life. This year was huge in that respect as you’ll see on page 2 with our gallery of over 300 shots from the show this year including TONS of cosplay that goes from “huh?” to “I really need to get on top of my game for next year” because seriously, many of these fans took it to the next level and it’s scary to imagine how high they might go next year. Even if you’re not up for dressing like your favorite character though, there are many shops at AX that sell outfits (mostly for women) and wigs that would allow one to mesh in with the crowd if they desired. Bring your wallet though because on the spot service isn’t exactly cheap.

Anime Expo for us had one of the most active years we’ve seen or felt in a while and not just by sheer traffic numbers. It’s great to be a part of it and to see that even young kids can get in on the show and appreciate all the goodies, the movies, the costumes and the fun that it brings along. The only issue that still comes up is LA is still a drive so it makes hitting every single day a task when the show crosses over with normal 9-5 work days in downtown on Friday and Monday. The show banner said they’ll see everyone back in 2013 so it’s doubtful they’ll be moving even if the Farmers Field project goes forward, at least LA has this one secured unlike E3 right now. Although I wouldn’t protest if they moved the show over to the ACC temporarily, just saying.