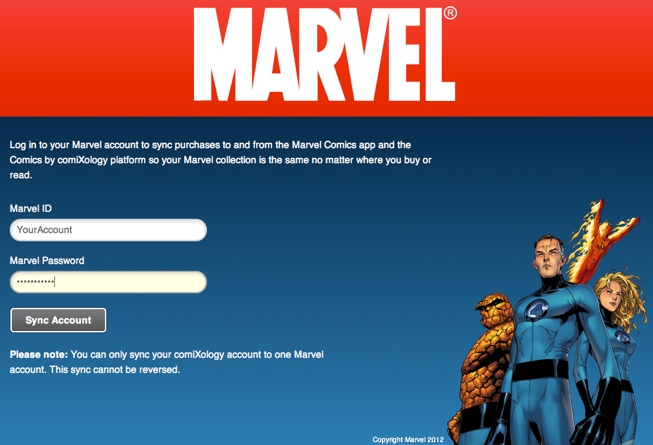 Today comiXology, the revolutionary digital comics platform, and Marvel Entertainment, one of the world’s most prominent character-based entertainment companies, announced that consumers can now sync their purchases between comiXology’s platform and the Marvel-branded digital storefronts on iOS, Android and the Web.

Customers with Marvel purchases on separate Marvel and comiXology accounts can sync previous and future purchases by logging into the their comiXology account and visiting https://www.comixology.com/marvel-sync. Customers will be prompted to enter their Marvel account information to sync the two accounts. The purchased comics will then be available to read on the Marvel Comics app, and will also appear on the comiXology platform across iOS, Android and the Web.

“This is just another step towards providing the best customer experience for all comic buyers no matter where they buy their Marvel comics,” said comiXology co-founder and CEO David Steinberger. “Fans can now not only read all their Marvel purchases on their Marvel Comics app and comiXology app and use both apps to get the latest can’t-miss super hero epics every week.”

Marvel fans can find single-issue digital comics, trade paperbacks and original graphic novels via the Marvel apps available for Apple iOS and Android, as well as the new web-based Marvel Comics Shop, all powered by comiXology. Marvel comics can also be found on the comiXology platform available on Apple iOS, Android, Kindle Fire and comixology.com. In addition, Marvel’s digital comics are available through comiXology’s Digital Storefronts for brick-and-mortar retailers and on their new Windows 8 Preview application.

The comiXology-powered Marvel Comics app launched in 2010 and has remained one of the top grossing apps in the iTunes store. As the first major comics company to offer single issues for digital purchase and featuring the largest library of digital comics, Marvel continues to be the industry leader in digital innovation.