Review – Jack White and The Peacocks at Mariachi Plaza – 2012 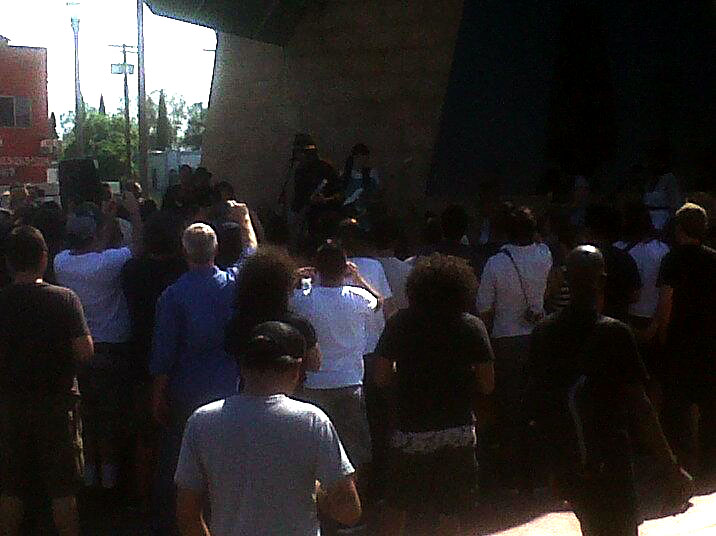 Review – Jack White and The Peacocks at Mariachi Plaza – 2012

Following an impromptu Tweet and Facebook post, the ever impressive Jack White took center stage at the historic Mariachi Plaza in Boyle Heights, California. A stone’s throw from downtown LA, Mariachi Plaza has been host to Mariachi musicians since the 30’s and yesterday Jack White and his all girl band, The Peacocks lived up to the musical richness and cultural diversity of the community.

Amid street vendors, Metrolink commuters and a blistering sun, about 70 ecstatic fans gathered around the small concrete stage and listened to Jack White do what he does best…he played and sang from his heart. Devoid of lengthy sound checks, opening bands and muscle-bound security to keep you far from the stage, we stood without pushing, listened intently, clapped, sang and swayed with Jack’s hypnotic blend of punk, blues, country. Opening with Sixteen Saltines, one of the brilliant tracks from his new album, Blunderbuss, Jack and the rest of the band sounded amazing as they smiled and played with every bit of energy that we have seen delivered to crowds of thousands. Following with the high intensity of Dead Leaves and the Dirty Ground, an impassioned performance of Love Interruption and a quasi collective sing-a-long of Hotel Yorba, their energy continued to pull passerby towards the stage and in their adrenaline fueled performance, we all were all treated to a powerful reminder of just how versatile, energizing and captivating his music really is.

Jack has been doing these special “B” shows around the country usually on the same day in which he has a concert later. Under no obligation to do these free shows, the fact that he does them shows just how dedicated he is and how much his fans mean to him. Following him around the country is the Rolling Record Store, yes, it’s exactly what it sounds like. An absolutely awesome bumble bee-esque record store on wheels filled with exclusive Third Man vinyl, shirts, buttons, 45 adapters and koozies…yes, koozies!

Jack White is playing tonight, August 11th at the Shrine Auditorium in downtown LA and if you are really lucky, he just might be playing at a plaza, record store or automotive shop near you!

For more information on Jack White and a whole bunch of other awesome bands go here: 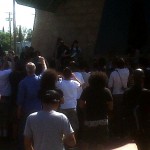 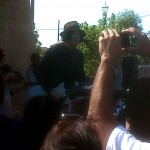