THE LATEST ADDITION TO THE

When looking for a key moment to immortalize as the second sculptural piece in Dark Horse’s highly coveted line of Game of Thrones collectibles, Dark Horse turned to none other than writer/producers David Benioff and D. B. Weiss for the most “statueworthy” moment in the then-unaired second season.

The two chose the memorable scene when Tyrion, as portrayed by Peter Dinklage, charges into battle, leading the defense of King’s Landing against an assault by King Stannis Baratheon in the Battle of the Blackwater. They further assisted with special photographic reference taken during filming, expressly for use as sculpture reference for the piece.

“When Dark Horse Deluxe began developing a new line of collectibles based on the HBO® adaptation of Game of Thrones, we were pleased to discover we had the full attention of all involved, from the team at HBO Global Licensing to the principals steering in the production,” said Dark Horse’s VP of Product Development, David Scroggy. “The Tyrion statue is a benefit of that communication, and we know the fans and collectors will recognize the quality that is the result.”

Dark Horse is currently offering the statue to the trade for advance order. The Tyrion statue will be issued in a limited run, with the final edition size undetermined at press time.

This detailed figure measures approximately 10 inches in height and 9.5 inches across its base, which features Tyrion’s cast-aside helmet and other painstakingly re-created details. 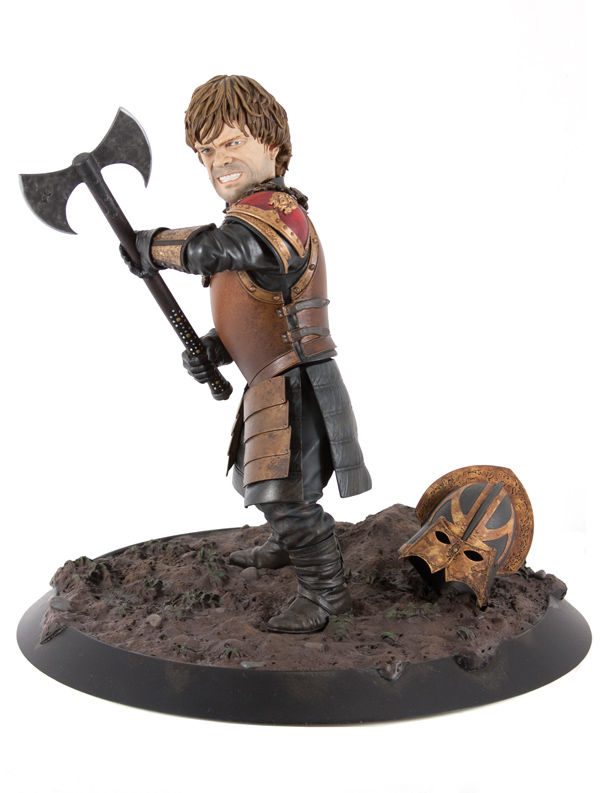 Hand painted and numbered, the Game of Thrones Tyrion statue will come packaged in a deluxe full-color box.

Fans of the series can view a “Making of the Tyrion Lannister statue” video on the Dark Horse Blog.