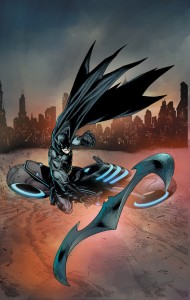 Leaping back in time from issue #12 we have issue #0 of Batman. Will the origins of Bruce be told? Will we relive his past training and frustrations? No. Not really, this is a comic book after all and not a massive graphic novel where they have that kind of page allowance. We see a young Bruce return to the streets where his life was changed forever.

Instead of a dark emotional tale of flashbacks we get something different, a young rich man in the slums working to infiltrate and break down the infestation that haunts it. He is Bruce Wayne and he’s not exactly prepared for the utter mess he’s about to unleash, he gets shot at, punched around chased and he fumbles  like a newbie. But the important part is, he’s the newbie the city needs and he has the determination and massive fists of cash to make this work.

Issue 0 is a bit embarrassing for Bruce but it’s a genuine tale and honestly it helps place some history in this new beginning for Batman. We see classic figures like Gordon and we see the roots of the Bat family start to plant themselves throughout Gotham without feeling like a forced story of the group. He’s daring and eager and attempting to push himself to be as above the cut as possible so no one gets the drop on him, he’s not exactly Batman yet but he’s sure working to get there fast.

For those who thought 12 was too much of a deviation, 0 makes up for that greatly and it doesn’t just leap back into the Owl’s to put in quick story. It’s a human look at a man who wants to change things and will stop at nothing to do it.