Don’t want to wait for The Walking Dead Season Three premiere this Sunday night to get your zombie fix? Then make sure you take advantage of THE WALKING DEAD HALF-OFF SALE. This pre-premiere event brings together Robert Kirkman, creator and writer of The Walking Dead and writer/Executive Producer of the hit AMC TV show based upon his groundbreaking comic series and bestselling graphic novels; Skybound, his imprint at Image Comics; and comiXology to offer a well-timed sale this weekend from Friday, October 12th to Monday October 15th on the original, comic series that inspired the show, the novels, the games and the entire universe of The Walking Dead. Now is your chance to read the original The Walking Dead ongoing comic book series. 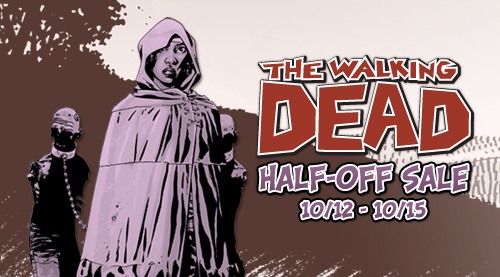 All the issues of The Walking Dead will be .99 cents, and Volume 1 through Volume 16, collecting the first 96 issues of the series will be half-off! Where else can you get this level of entertainment for under a buck?

Based on one of the most successful and popular comic books of all time, written and created by Robert Kirkman, The Walking Dead captures the ongoing human drama following a zombie apocalypse. The series follows a group of survivors, led by sheriff Rick Grimes, in search of a safe and secure home. However, instead of the zombies, it is the living who remain that truly become the walking dead.