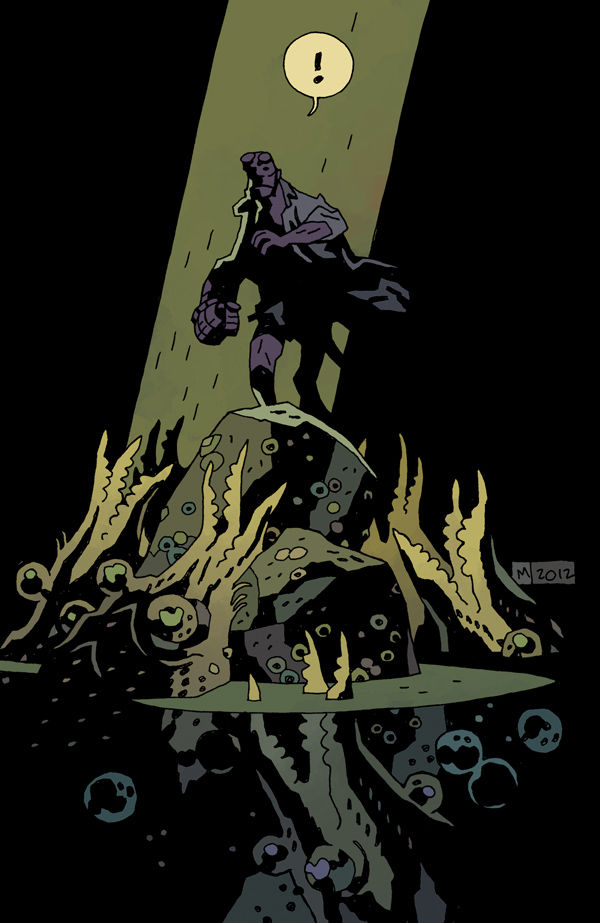 Hellboy In Hell #1 Is the continuation of The Storm and The Fury Tales, after sacrificing himself and Great Britain, Hellboy is cast into hell where many of demons and monsters he had faced are there waiting on his arrival, Mike Mignola is back as writer and artist for this story arc.

In the beginning of the issue we see Hellboy fighting a dragon in what looks like hell, after stabbing it in the chest with a sword both him and the dragon are seen crashing into a pit, inside a unknown being grabs and pulls out his heart stating “If I’m bound for hell…I will not go alone”.  After that we see the Baba Yaga and an Sir Eric are talking about Hellboy slaying the dragon and his run in with a demon named Nimue (The one who pulled out his heart), Sir Eric tells Baba Yaga his plans of taking Hellboy with him saying that his story is not over yet, Baba Yaga warns him of what trouble it will cause once Hellboy is released and is he ready for that burden. Meanwhile Hellboy inside the pit is confronted and attacked by a collections of various monsters, with the help of Sir Eric the warlock he is saved and they teleported to what looks like a old monastery. There Hell tells him that one the demons that attack was Eligo’s a duke and knight in the living world who was shamed by Hellboy and cast down to the pit once Hellboy defeated him, the conversation is cut short when Eligo appears and attacks Hellboy pushing him through a doorway..

Final thoughts:  Hellboy In Hell #1 is a ongoing story with multiple arcs, similar to the Conan comics also release by Dark horse. New readers my not understand what’s going on in the beginning of the issue because of the multiple story arc tie-ins . Writer Mike Mignola keeps issue #1 simple and straightforward for the most part making it relatively easy to follow for new readers like myself, On the other hand hardcore fans my not like that it’s a little simplistic. In the end Mignola writing is good enough to keep the readers wanting more.

Let me say I do recommend readers to checkout  past issues so you can get a clue on certain things, besides that Hellboy In Hell has alot of potential and I can’t wait see how Mike Mignola unravels this story.