Dark Horse Announces Reprint Timed with the Release of

Dark Horse Comics gives one of its most beloved creator-owned series in its vast archives a long-overdue deluxe treatment! Demand has proven to be much higher than Dark Horse could have anticipated, with the first printing selling out before hitting the shelves of comic shops today.

Rick Remender, Tony Moore, and Jerome Opeña’s Fear Agent was a critics’ darling long before the X-Men joined the Avengers. Published first by Image Comics,Fear Agent came to Dark Horse in 2007 and stayed through the series’ end in late 2011. It follows the adventures of Heath Huston, a first-class drunk, an interplanetary alien exterminator, and the last of the Fear Agents, the band of Texans who once defended Earth from an onslaught of aliens seeking its annihilation. After our “hero” has been stripped of all that he loved—his home, his family, and his world—Huston spends his hours putting himself in constant danger for low wages and little thanks, with a bottle of whiskey to keep him company.

This epic tale is told in three major parts: Heath’s origin as a young father fighting an alien invasion, his time as a middle-aged, broken-down alcoholic alien exterminator, and his old age, as the last man alive who can stave off robotic conquerors. 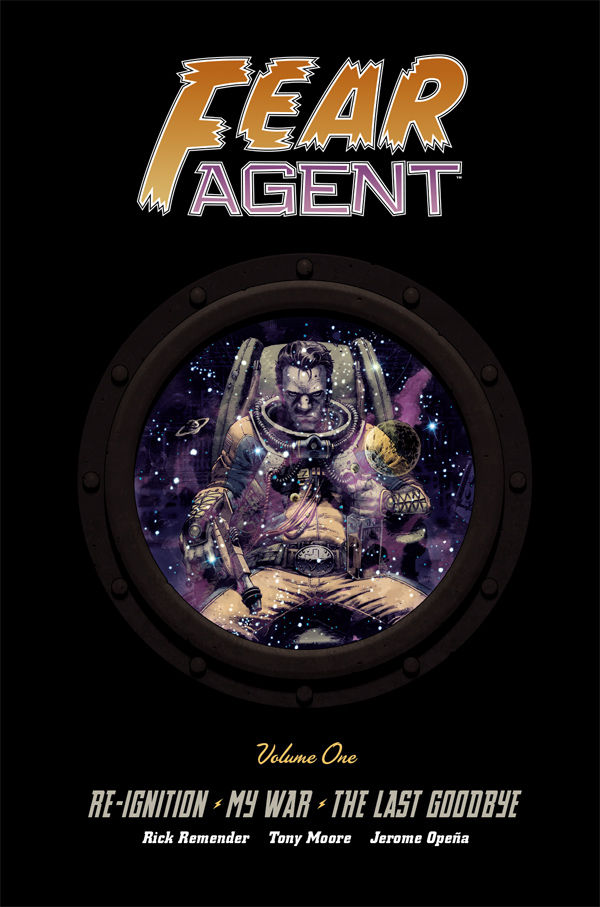 “Fear Agent was a six-year-long labor of love that Tony, Jerome, and all the collaborators dumped themselves into, and it’s extremely gratifying that the series is breaking through to a new audience. It’s nice to know Heath Huston will live on.”

“I’m truly overwhelmed by the response to this hardcover edition. We put a lot of blood, sweat, and tears into the pages of Fear Agent over the years, so it’s great to not only see it collected into such a handsome tome, but to see that our man Heath is still finding his way into new readers’ hearts, as well.”

“The Fear Agent library selling as well as it has been is amazing! It’s gratifying to know that work we all did years ago is still exciting readers and hopefully finding a new audience as well.”

This deluxe hardcover library, the first of two, collects issues #1–#15 of the acclaimed Fear Agent comics, along with half of the Tales of the Fear Agent side stories, covers, pinups, and artists’ sketch galleries.

To celebrate this landmark release, Dark Horse will make the first two collections available digitally for the first time, with the first issue available for free download! Visit Digital.DarkHorse.com for more details.

Make your way to your local comic shop today, or order now from Amazon or Barnes & Noble, as quantities are extremely limited!

Dark Horse is going back to print immediately, with a new volume shipping from Diamond on ­March 27, 2013, and arriving at retail on April 3