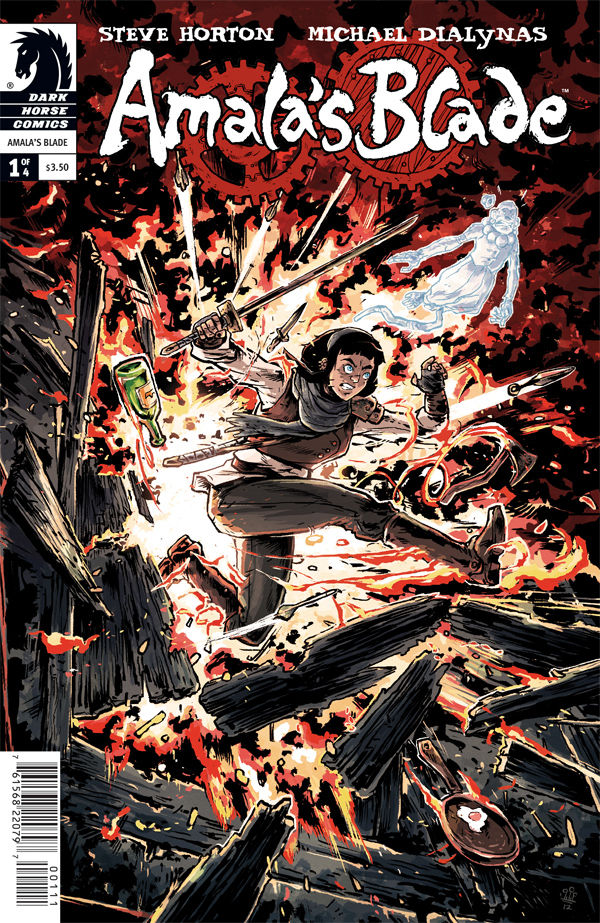 “AMALA is the greatest assassin in all Naamaron—just ask her! And she’d be even better if all these ghosts didn’t keep following her around! Naamaron is a land emerging from twenty years of civil war. To the west, in the city of Ouon, are the Purifiers, a self-made people powered by steam. To the east, in the city of Avatouon, are the Modifiers, who worship technology and implant it in their own bodies. SO FAR: Amala has just finished the Behemoth job and in the process killed the captain and commandeered the ship. Now she’s undercover on her next assignment, in a tavern deep in Purifier territory”

At the Broken Gear Tavern somewhere in the Purifier Territory, Amala who’s using the town crier as cover is listening to what looks like the town drunk tell how he killed one of Vizier’s men, a mail delivery package of Stembulbs is brought to the bar owner who displays them to everyone in the bar, at the very moment Amala notices a wanted poster of her for 1,000,000 and realizes that’s is in danger, she quickly jumps off the bar and takes cover, a fight between the men breaks out over who will take her in mean while she confronts the man who killed Vizier’s man, visibly  shaken up about what he did he tells her that he shot the man in the back and ask’s her to take  protect him but she informs him she’s there to kill him and process to cut his throat , A fire breaks out in the tavern and she escapes with the contract completed.

Meanwhile in Neutral Territory at Vizier’s palace, he and his subordinate Magister are informed of the trouble Amala has caused, they comment on how she’s putting target on her back. Which prompts Vizier to give Amala one final mission which he promises will get her killed. At Smitty’s she and Ren are doing sword training when a modifier device is giving to her, the message informs her of the mission Vizier and magister had promised, after hearing the message and receiving payment for the last mission, Smitty comments on how completing this mission is clearly impossible without help. Amala asks Ren to meet her before she takes off, there share a moment together and Ren expresses his doubts of ever seeing her again which she reassures him she will.

Traveling through mountain terrain a companied by one of the many ghost she usually sees they talk about the mission and how being able to see ghost almost got her killed last time. Nightfall comes and she takes up camp two unknown robot assassins appear ready to attack as she sleeps

Finial thoughts: Right form the jump Steve Horton gives us action, making it easy to follow Artist Michael Dialynas does a wonderful job making it so his focus on follow, more over panels with erratic poses which makes every panel look over crowded, its refreshing to see simple straightforward artwork sometimes. The world Steve Horton and Michael Dialynas bring to us in Amala’s blade #1 is filled little strings of interactions that turns explosive in the begining , but towards the end the issues focuses on Dialog and plot development for future issues , all and all its a set up issue.

Amala’s Blade seems looks to be a straight forward action/adventure story with a nonsense main character, that is reminiscent of past Dark Horse characters, I will say Amala’s Blade has caught my interest, so I’ll keep a close eye on this series as it develops before I give a real review on it