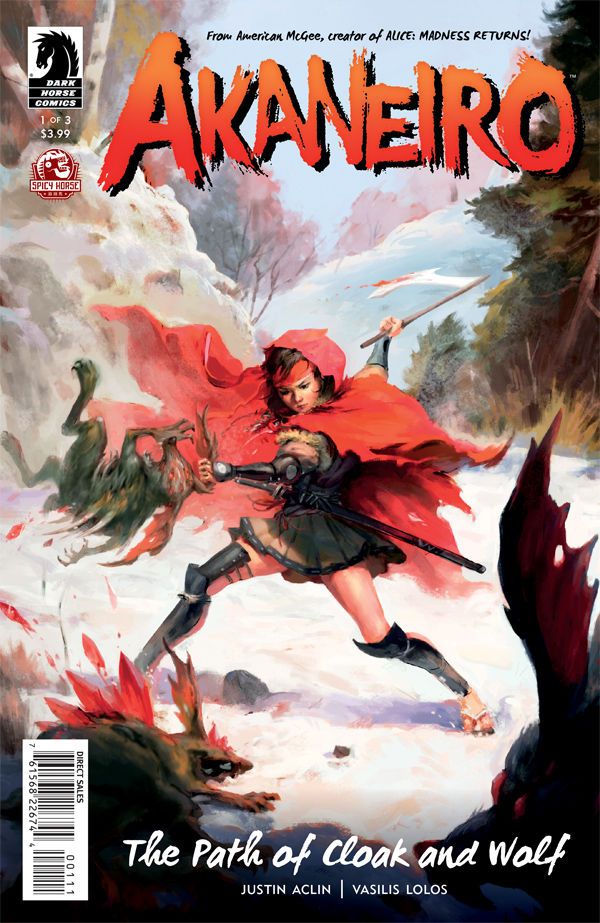 From the brilliant imagination of video game auteur American McGee comes a dazzling reenvisioning of Red Riding Hood set in the wondrous world of Japanese folklore! Justin Aclin and Vasilis Lolos take Kani a young woman torn between two cultures on an epic adventure battling devious Yokai for the fate of her world!

Akanerio was first introduce to us through a action role-playing game that was developed by American McGee’s Spicy Horse company, the game was base heavily on the Little Red Riding Hood tale but in feudal Japan also add a mixture of manga and Japanese folklore.

Issue #1 is basically a origins issue, the main character Kani whose tribe the Ainiu’s live on the island of Yomi, they are a religious tribe that believe in spiritual guidance or direction so it seems, writer Aclin doesn’t really get into detail about them,Then there’s another tribe called the Akane’s they are a warrior tribe that defend the island form “Yokai” demons that also in habit Yomi island. The Akane’s have a elite group of specially trained warriors called the Red Hunters, who are the ones that defend the island.

The two tribes have a history and are both trying to gain the upper hand on one another, The main character Kani whose mother was killed by a Yokai believes the Red Hunters are necessary and that the ways of her people are slow. During a spiritual ceremony a Yokai eludes one the Red hunters and attacks the Ainiu village, Kani who witness the death of her mother begins to attack the demon along with the Red hunter it escaped form. After the demon is killed the elder of the Ainiu’s blames the attack on the Akane’s and the Red Hunters, he declares war against them. But before things can get out of hand Kani suggest that maybe war could be eluded if she was to join the Red Hunters, the other elders agree that just maybe things could be better between the two if she would join the clan, but only if she can pass the test all Akane’s must take before becoming a red hunter.

During her journey to the village of Akane Kani endures the harsh snowy mountains a group demon infected hares that attack her now injury and tired she comes as cross a man standing by two rhodes. After getting directions form the man she continues her journey little did she know is that the man was actually a Yokai disguise as a man and he just sent her in the wrong direction.

Final Thoughts: Akanerio #1 has very solid writing theirs a good amount of exposition throughout the issue, Justin Aclin blends both American and Japanese folklore together quite well the flow and pacing reminds me of a manga one that comes to mind is Inuyasha, if not for the artwork it could maybe pass off as a manga. Now when I say “if not for the artwork” I’m not saying its bad. Artist Vasilis Lolos does a beautiful job on the monster designs each have there own distinct features which is  must when creating beasts who are mutated by demons. While the character designs are good the lack of backgrounds in some panels is unacceptable, Shu yan cover art is amazing if may say.All in all Akaneiro #1 is a good issue and worth following I’m for sure going to keep an eye out for it.