IDW Gets Animated this September!

IDW Gets Animated this September!

Prepare for your favorite IDW comics to get a little more animated than usual this September! All month long, IDW will be publishing special “IDW GETS ANIMATED” variant covers rendered in vein of classic cartoons! Ever wondered what The X-Files’ Mulder and Scully would look like as colorful, hijinks-having monster chasers?  Ever wanted to see the mighty Judge Dredd as a rubber-jointed 70’s warrior? OF COURSE YOU HAVE!

Luckily for you, intrepid reader, so have we! This September only, eager fans will be able to find the following titles with special “IDW GETS ANIMATED” variant covers:

While the content of the books will be the same, these variant covers are going to be a vivid blast of cartoon madness. It’s going to be a fun month to say the least, so fans are urged to drop their local comic shop a line and reserve their copies now! 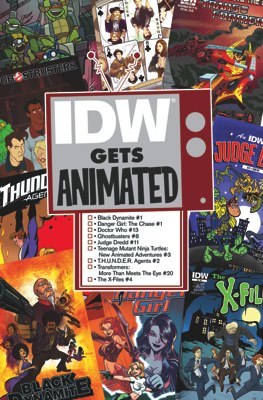