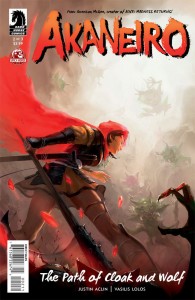 The brave young warrior Kani battles a gauntlet of fantastic mythical beasts inspired by Japanese folklore. However, things are not what they seem, and danger lurks where Kani least expects it!

After being tricked by Yokai disguse as a human, Kani is sent to village that has been taking over by two Yokai who place her in a dream like trance, in this dreamlike state she is training to become a Red Hunter and meets up with two unknown Red Hunters who accompany her, At the same time in the real world red hunters Mitsuo and Fumiyo are looking for her since she hasn’t arrive at the village, as they track her they also encounter the yokai fox who mocks them.

Back in Kani Dream state, Kani and the two other red hunters come across a few Yokai who get the best of Kani, Meanwhile Mitsuo and Fumiyo return to Kani Village in hopes of finding her there. They meet up with her father and ask him if he’s seen her, thinking the worst Kani’s father starts to panic. And begins to question the red hunters of Kani whereabouts as well.

The fox appears again starts to mock Mistsuo and Fumiyo again, under the assumption the Yokai has taken her they capture him and ask him where he has hidden Kani. He tells them Kani is in a place that none of them can find her, he then asks if they have heard of the Demon king in Frostrock Mountain and the Ghost Werewolf Clan.

Next we see a member of the Ghost clan Tanaka taking to the Demon king, he says that Kani will and heart is strong and that it will be difficult to complete the task he has given them. The Demon king tells him that killing Kani who hurt the Yokai’s plan of taking over, but if they were to corrupt her by taking something form her maybe then they could succeed.

The issue ends with Kani waking up and confronting her captors, who turn out to be werewolves of the ghost clan, as they attack the unarmed Kani she is pushed to use a new ability that taps into the karma crystals.