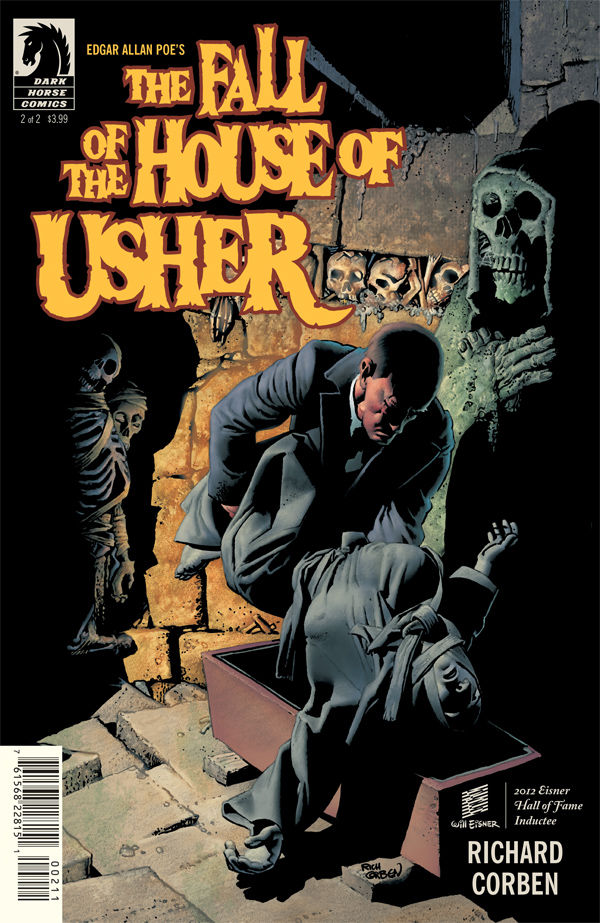 Richard Corben’s finale installment of Edgar Allan Poe’s The Fall of the House of usher comes to its conclusion in this issue, with the first issue ending with Roderick’s sisters death will something similar happened in this finale?

This issue starts off with Weber and Allen taking the mysterious painting of Roderick sister down to the manors basement, as Roderick says a few creepy things, Weber who is now suspicious of whats going on and remembers what the woman to told him the first day he was there, makes him later return to the basement, he finds a letter form her saying that if anything was to happened to her that he should destroy the painting no matter what.

after opening the coffin and looking at the body Allan realize that the girl was murdered and wasn’t actually dead in the beginning. Allen then confronts Roderick about it with ensures a fight, Allen then grabs the painting and throws it into the fireplace enraged Roderick angrily attacks Allen meanwhile in the basement Roderick’s sister is seen getting out of the coffin and making her way up. As the house starts to crumble Allen and Roderick continue to fight as the house falls apart around them, fight is cut short by Roderick’s sister who starts to regenerate in front of both them, she then grabs Roderick and they both fall to there death’s

Although this story is strongly written  and more creeper then the original by Edgar Allan Poe, it does seem a bit rushed especially this issue even the art work looks rushed, when I read the issue I literally said ” huh”  at the end because of how quickly it ended, but with that said it still looked fantastic even though it was so short