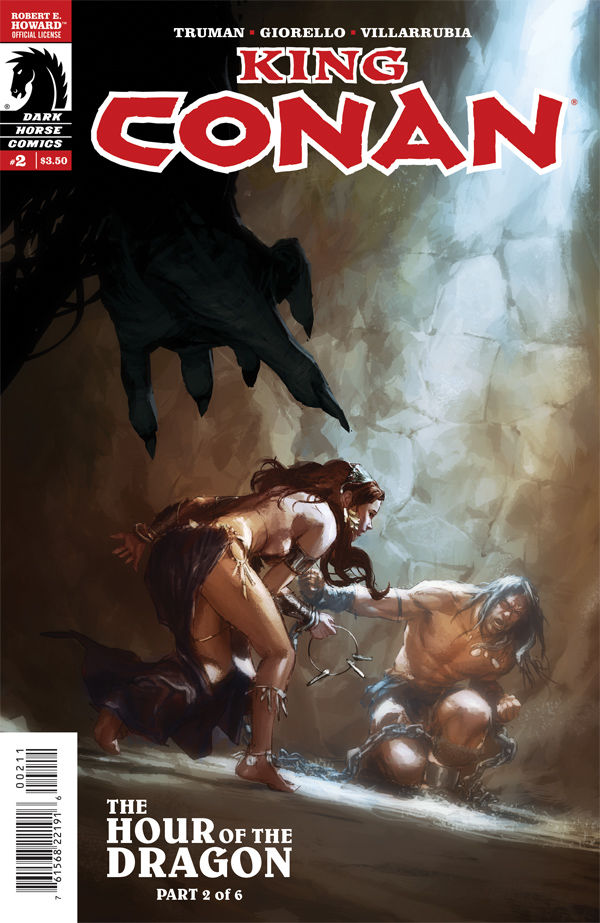 Weakened by Xaltotun’s spells and imprisoned in a foreign land, Conan has lost his kingdom—and could lose much more! His only hope for escape is a mysterious, enamored harem girl named Zenobia. In an underground dungeon filled with slavering horrors, Conan and his future queen must fight for their lives!

King Conan – The Hour of the Dragon Part 2 continues with a weakened Conan battling against King Nemeda and his followers Tarascus and Valerius. We see the emotions of Conan as he slashes his way through the herds of men, until finally being stop by Xaltotun himself who casts a spell that knocks him out. Now with Conan out of the way Nemeda plans to take out Prospero but Xaltotun takes him in as his hostage. Now locked in a chamber of King Tarascus in Beliverus, Conan wakes up and  is once again confronted by the sorcerer. Xaltotun offers Conan his freedom and his Kingdom back only if he declares allegiance to him, As a true warrior and Cimmerian Conan declines his offer and threatens the evil sorcerer, Xaltotun displays more of his power by casting a spell on Conan and telling him his threats are futile against his powers.

Later that night a guard comes in and starts to harass Conan as he’s chained up, that quickly ends with Conan smashing the face with a single punch. After the body of the guard is dragged out by extra guards Conan notices a light coming closer to the cell and a set of keys opening the door A woman’s voice calls out to him, she tells Conan that her name is Zenobie and that shes has been looking for him for a long time. In tears Zenobie asks Conan for help in which he agrees.

The issue ends with the two trying escaping the underground chamber, But some realize that some else is in the chambers with them.

Final thoughts: This issues is relatively short not much is going on as far as plot development, the biggest twist is probably the moment where Xaltotun asks Conan to follow him. Writer Timothy Truman really doesn’t dive into character disposition his style is straight forward fast paced and filled with lots of action like the Conan arcs in the pass. Artist Tomas Giorello does a wonderful job capturing and Illustrating key moments during the issue.