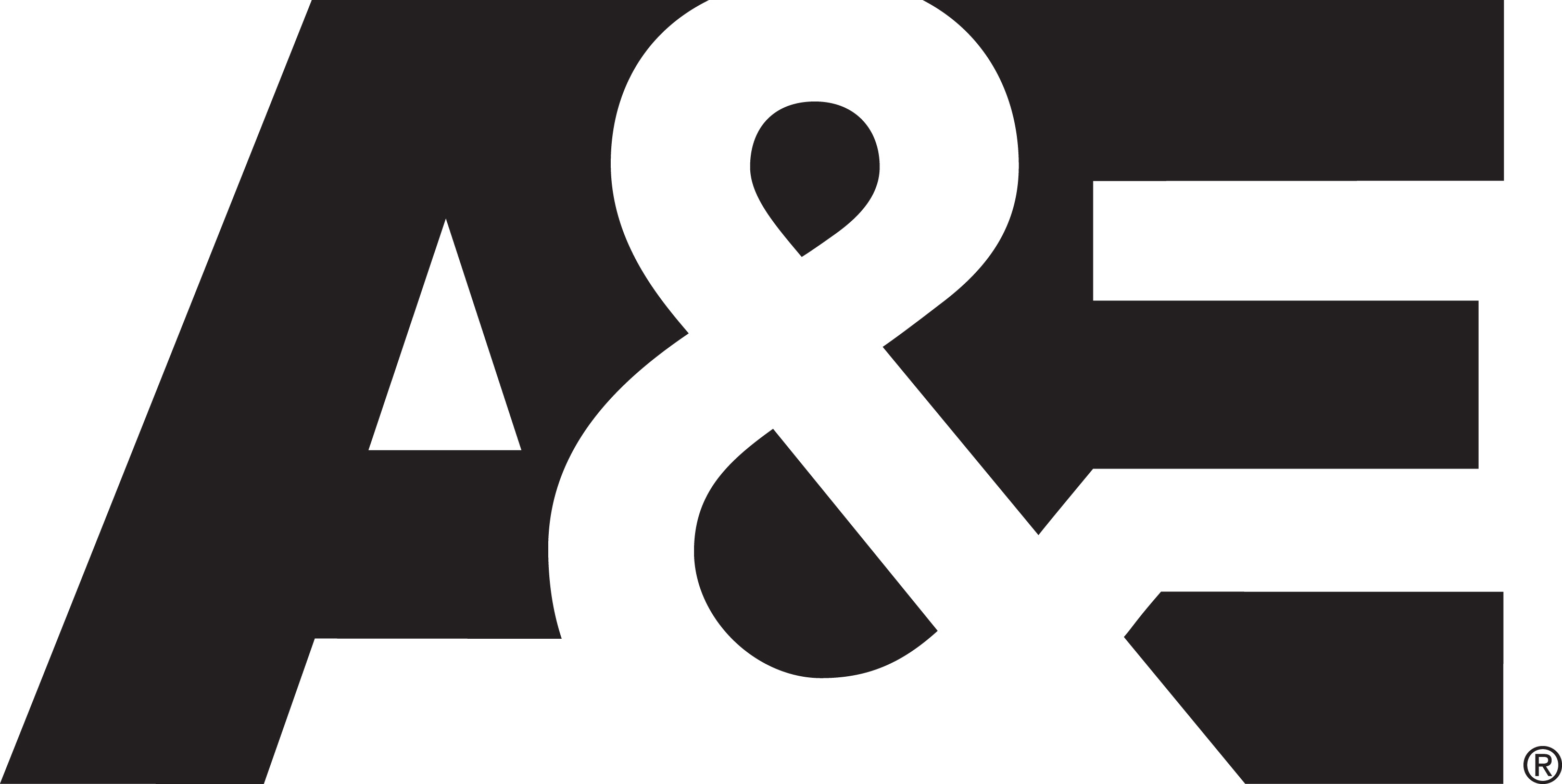 This holiday season A&E has finally released there upcoming holiday gifts for you and your loved ones. Form Duck Dynasty to Robotech A&E has tons of Consumer Products and classic licensed merchandise for every member of the family.

Did you know the Duck Dynasty family, the Robertson’s, play golf? And when they do, they prefer to tee it up with Srixon Blaze Orange Golf Balls. Now you can play Blaze Orange and bring your favorite bearded redneck family to the golf course with Srixon’s new Duck Dynasty logo golf balls! Happy Happy Happy! ($16.99; golflandwarehouse.com)

If you’re a member of Duck Nation, you’ll want to wear this sturdy backpack cooler for those long days in the duck blinds! The Maxcold® backpack cooler has 25% more foam to keep your items cooler longer. There are numerous exterior storage pockets, an adjustable, padded comfort strap and a leak-resistant antimicrobial liner. ($34.99,Target)

As seen on Duck Dynasty, you too can enjoy the off-roading adventure experienced by the Robertson’s during their trip to Hawaii.

Exclusive to A&E’s online store, this Duck Dynasty X2 Segway is built rugged, tough, and is designed to take you places. Its innovative design moves you over a variety of terrain, be it the grass in your backyard or the gravel and dirt in your favorite off road spot. The Segway features camouflage fenders and Duck Dynasty logo the side LeanSteer, matched with deeply treaded tires and higher ground clearance to give you a smooth, stable ride, and the durability you’ve come to expect from Segway. 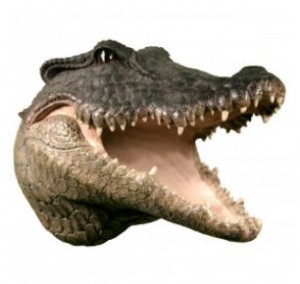 The Swamp People Attack Plaque Alligator is 3D wall art to inspire adventure stories and lively conversations. Each lifelike plaque comes with metal keyhole to mount the gator flush to the wall, and is packaged in sturdy box with hangtag. ($59.95)

This extraordinary and groundbreaking new Blu-ray collection from HISTORY® offers three perspectives to deconstruct the deadliest conflict in human history: WWII in HD, the first documentary to show original color footage of WWII in sharply enhanced high definition, brings the conflict to life with journals and accounts of those who served in the war’s biggest battles.  In the critically acclaimed WWII in HD: The Air War, you’ll feel the fear and exhilaration of a battlefield 30,000 feet in the air, as you accompany the U.S. Air Force on aerial missions fighting for control of the skies. From the devastation of the Blitz in Britain to the final dogfights over Europe, extraordinary archival footage – in color and in HD for the first time – re-creates historic fights like never before. And in WWII from Space, you’ll witness the war through an all-seeing CGI eye offering a “satellite” view from above. Highlighting the war’s ten key tipping points, the film places major events in global perspective while illustrating the hidden ripple effects of crucial incidents. ($24.99, amazon.com)

Why is it called the World Series if it is always played in New York?  For years, this brash statement held true; then four decades passed without an all-New York World Series matchup. That all changed in 2000, the first time the Yankees and Mets ever squared off in the Fall Classic. This battle featured the high-energy New York Mets against the two-time defending champion New York Yankees. With a roster that included World Series MVP Derek Jeter, Mariano Rivera, Andy Pettitte, Bernie Williams, and Paul O’Neill, the Bronx Bombers captured their 26th championship in a hard-fought five game series, all captured in this incomparable,  5-disc set, featuring every complete game and memorable play of this unforgettable Fall Classic. ($29.99, amazon.com)

Straight off the bayou and onto your iPhone, these Duck Dynasty and Swamp People cases put the Robertson Family and the gator-huntin’ Troy Landry to work protecting your iPhone and feature high-gloss graphics on a snap-on polycarbonate case. They’re Redneck Approved and ready to keep your iPhone 5/5s safe from bumps, scratches and gator bites ($19.99; Griffin/griffintechnology.com)

“My Life is a Lifetime Movie” Tees 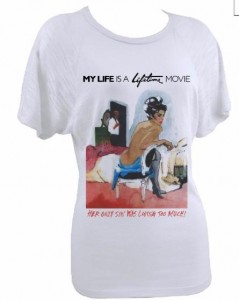 Dreamy new guy become a nightmare?  Husband having an affair with your mother?  Son also having an affair with your mother? Considering same?  If you happen to be living a Lifetime movie, own it and say it proud with three very special, limited edition tees, featuring original artwork.  Whether you choose “JUST WAIT. YOU’LL BE SORRY”, “HER ONLY SIN WAS LOVING TOO MUCH!” or “HE’S OUT COLD…I’M ON FIRE!”, these soft 100% cotton shirts, available in sizes S-XXL, will show the world that your life is indeed a Lifetime movie. ($26.95 ea.)

There’s no question that Abby Lee Miller knows how to shake things up.  Whether she’s instructing her world-class dancers on how to improve their next routine or telling moms off, she’s a force to be reckoned with. Show your love for the dance instructor with the Dance Moms Abby Lee Miler Bobble Hip. The instructor and founder of Pittsburgh’s renowned dance studio will bring her moves and madness to your desk to show you’re a fan of Dance Moms and maybe even start some conversations! ($24.95) 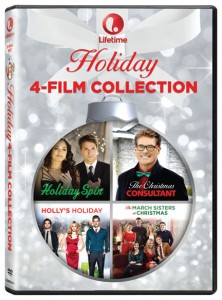 This delightful Christmas package of Lifetime® Original Movies has everything you could ever wish for!  David Hasselhoff  brings in the merry as a sought-after consultant hired by a workaholic mother (Caroline Rhea) to get her family through the holidays in “The Chistmas Consultant”; take a “Holiday Spin” with Ralph Macchio in a heartwarming story of a former dance champion and his estranged son; warm up to “The March Sisters at Christmas”,  a contemporary take on the timeless novel “Little Women” and “Holly’s Holiday” in which Claire Coffee plays an advertising executive who’s strangely attracted to a mannequin in a holiday window. After she’s knocked unconscious by a falling icicle, he comes to life as the man of her dreams – until she learns that his personality is still plastic! ($14.99,  Amazon.com).  Also available is THE 12 FILMS OF CHRISTMAS, a collection of 12 Lifetime Holiday films in one affordable 6-disc gift-set!   Lifetime Original Movies featured include “The Road to Christmas”, “Recipe for a Perfect Christmas”, “Home By Christmas”, “A Christmas Wedding”, “Holiday Switch”, “A Very Merry Daughter of the Bride”, “Under the Mistletoe”, “Holiday Wishes”, “Christmas in Paradise”, “Deck the Halls”, “His & Her Christmas, Will You Merry Me”? ($17.99, Amazon.com)

Hang out and laugh with your friends and the bearded men of Duck Dynasty with these 13″ plushes that speak the sayins’ they’re all known for. ($20.00srp ea.) 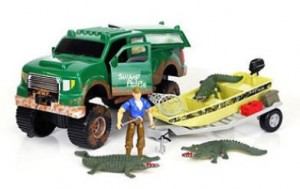 For those who prefer chootin’ gators to ducks, this holiday season kids can head out into the wilds with the alligator bandit himself, Troy Landry, with the Swamp People Deluxe Playset!  Featuring a fully articulated Troy action figure, a 4 x 4 with removable camper shell, a jon boat with motor and trailers, 3 scaly to scale gators and more, fans of the show will almost hear the skeeters humming! ($37.99, amazon.com).  Also available is an individual action figure of Troy, complete with lantern and gator. ($4.89, amazon.com) 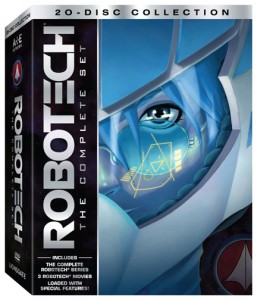 Carl Macek’s groundbreaking sci fi epic, ROBOTECH, has enthralled audiences since it first appeared on American television in 1985. The saga is told through the eyes of characters caught up in a series of wars that erupts when a mysterious spacecraft crash-lands on Earth at the turn of the millennium. The secrets of alien knowledge aboard this vessel were unlocked, leading to the development of “Robotechnology” and the creation of a vast arsenal of robotic “mecha” to defend the Earth against the alien threats that would eventually strike to lay claim to the mysterious power source known as “protoculture.”  One of the first-ever anime imports, this saga spans three generations of mankind’s fight for freedom and ROBOTECH: THE COMPLETE SERIES contains the remastered versions of all 85 episodes from the three Robotech Wars: THE MACROSS SAGA, THE ROBOTECH MASTERS and THE NEW GENERATION. ($59.98, Amazon.com) 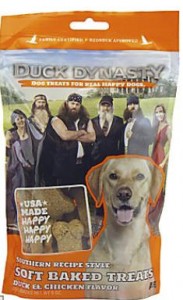 Whether you want to reward your dog for a successful water retrieval or just give him a tasty and nutritious treat, your best friend will love the new line of Duck Dynasty Dog Treats! These southern-style duck and chicken flavored dog treats, which come in three varieties – Soft Baked, Bicuits and Training Treats – are baked with 1 part home cooking, 1 part love, and 2 parts redneck. With no corn and no soy, dogs everywhere love ’em!   Happy, happy, happy!  Also available are mint-flavored Dental Treats.  ($6.99, Bass Pro Shops and basspropshops.com) 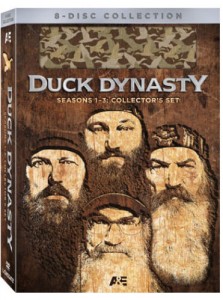 Keep the camo-clad Robertsons in your sights at all times with this DUCK DYNASTY gift set from A&E. With these down-home millionaires from Louisiana, there’s always somebody up to something that you can rest assured somebody else isn’t going to like. See what happens when Willie hosts his own radio show, but makes the mistake of bringing Uncle Si on the air with him. Watch how his employee retreat fails to build trust among the Duck Commander team. And you’ll want to catch Jase’s plans to prevent Missy from finding out he’s lost his second, newly replaced wedding ring. But the Robertsons never back down from a challenge, always taking on new adventures. Whether it’s a family cooking, fishing or football competition; a blind leap into winemaking; a spontaneous road trip in the RV; or their run-ins with critters of all kinds, this clan makes the most of their funny business. And now you can, too. But please, don’t fight over who gets to wear the enclosed DUCK DYNASTY bandana! ($49.98, Amazon.com) 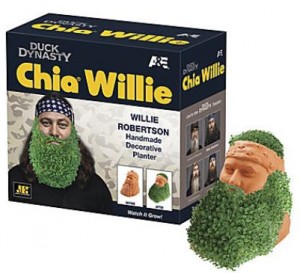 We’ve long had a love affair with the humorous Chia Pet, but they’ve now been designed fun for a whole new generation with the Willie & Uncle Si Chia Pets.  Duck Dynasty fans can at long last pay tribute to the Robertsons’ signature style by growing green beards as amazing as theirs! ($29.95) 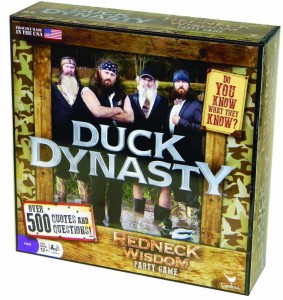 Face off against hilarious trivia questions from DUCK DYNASTY and guess the missing words in ridiculously funny quotes by Willie, Phil, Uncle Si, Jase, and rest of the crew. Fool other players with your believable answers and spot the genuine quotes from among the decoys to score! For 2-12 players ages 10 and up. ($19.95) 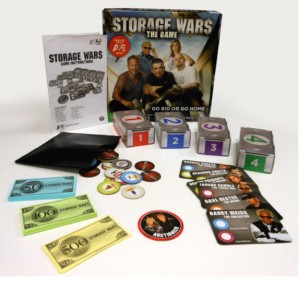 How much would you pay for what you can’t see? Based on the hit A&E series, the Storage Wars Game lets you bid on four abandoned storage lockers. You can see some of the contents, but most are hidden. Do you bid on what you know? Or try to win unseen treasure? Play as your favorite Storage Wars bidder and go bid, or go home! ($19.95) 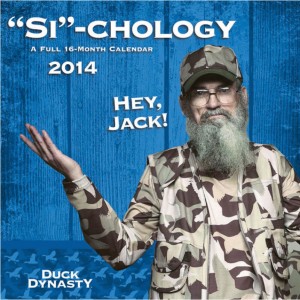 Let Duck Dynasty and Swamp People help count down the days of the new year with one of several 2014 wall calendars.  If you’re a fan of Uncle Si, or just say “Hey!” a lot, then the Si-chology 2014 Wall Calendar is for you!  If you’d rather enjoy the antics of the entire crew, then you can keep track of duck hunting season and all the seasons with a 16-month calendar that’ll bring you up to the new year with all your favorite Robertsons and their quotes.   And if catching gators is more your speed, then you’ll be able to mark when to choot ’em with this 16-month calendar ($12.95-$14.99) 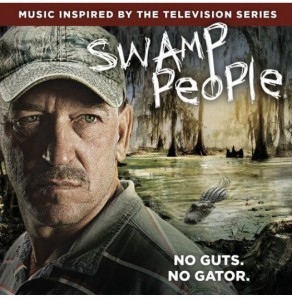 Rounder Records partnered with HISTORY® to celebrate Swamp People with this foot-stomping 13-song compilation showcasing the music that’s rooted in Cajun country.  Serving as an ideal companion piece to the series, the CD features the Neville Brothers, Tony Joe White, Buckwheat Zydeco, Jumpin Johnny Sansone, Hank Williams, Beausoleil with Michael Doucet and several others. Many of the tracks have been culled from Rounder’s vast catalog of southern Louisiana music and the title track, which leads off the set, is a new song written specifically for Swamp People® by vocalist Steel Bill, aka Billy Joe Tharpe, a native of Livingston Parish, Louisiana, who could best be described as a country rapper (the track is one of Troy’s favorites!).  ($13.97, amazon.com)