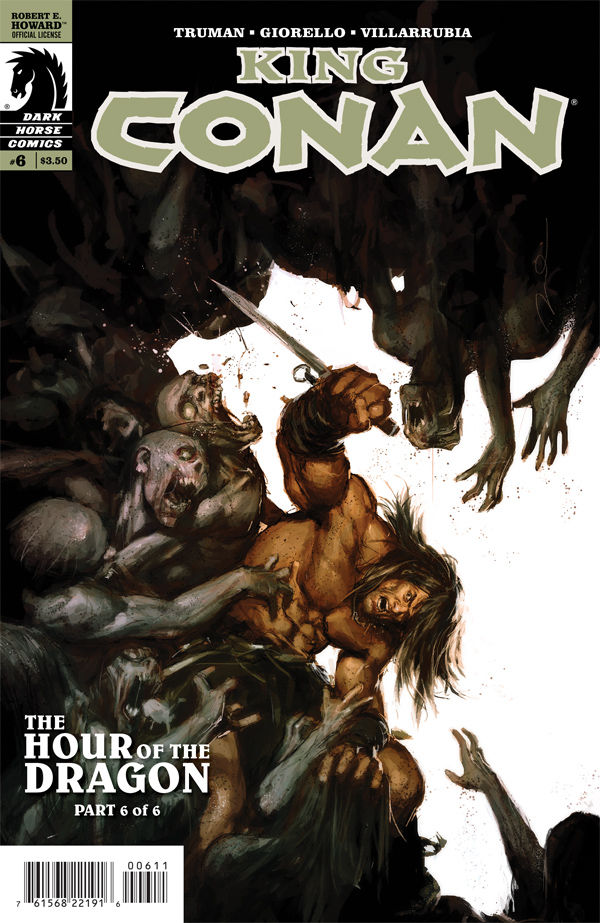 It’s seems we have reached the conclusion of the Hour of the Dragon Arc, And I’ve got to say it ended on a positive note, After rescuing Albiona, and with the help if Asura’s followers Conan then travels to the province of Poitain to find Trocero.

After meeting up with Trocero and the rest of his followers, Conan and company come up with a plan to steal the gem which is need to kill Xaltotun, A messenger arrives and tells of how the chest and its keeper Zorathus where taking out by trader and bandit Kng Valbroso, After a brief skirmish with Valbroso men Conan is then taking to Zorathus who is being tortured for the secret of the box and how to open it. In kothic tongue Conan asks Zorathus to give him the secret on how to open up the box, he then assures him that if he does the torturing would stop.

Valbroso with box in hand asks Conan whether the Zorathus told him how to open the box, knowing that there’s a trap set on the box, Conan tells him yes and gives Valbroso the password to the box. Before Valbroso opens it his finger is pricked causing him to bleed, he then opens the box and holds the gem, but seconds later he starts to scream in pain and cough up blood, Conan calls him a fool and tells him that the box with poisoned with Black scorpion venom. With Valbroso dead and the gem in his hands Conan starts to leave, but he is struck in the head by Zorathus torturer Beloso.

A chase alludes with Conan and Beloso, just when it looks as if Conan is about to grab the gem form him his horse’s legs gives out and then both fall to the ground knocking Conan out in the process. When Conan finally wakes up from being unconscious he sees a ghoul like creature dragging him through the desert floor, it is said that the people of the province call them eaters of human flesh, Again Conan has to fight his way out of an impossible situation. The arc ends with Conan wondering what the witch Zelata truly meant when she told him to find the heart of his kingdom.

In my review of the last issue I said Truman has done a great job balancing everything out and in this issue you can say the same. Hour of The Dragon part 6 is solid issue and respectable ending to the arc. Truman gives us a good twist at the end, just when it looks as if Conan is about to regain everything he has lost it is once again taking form him, because of that little twist at the end it sets up the next arc perfectly making it easy for him or whoever to continue on.