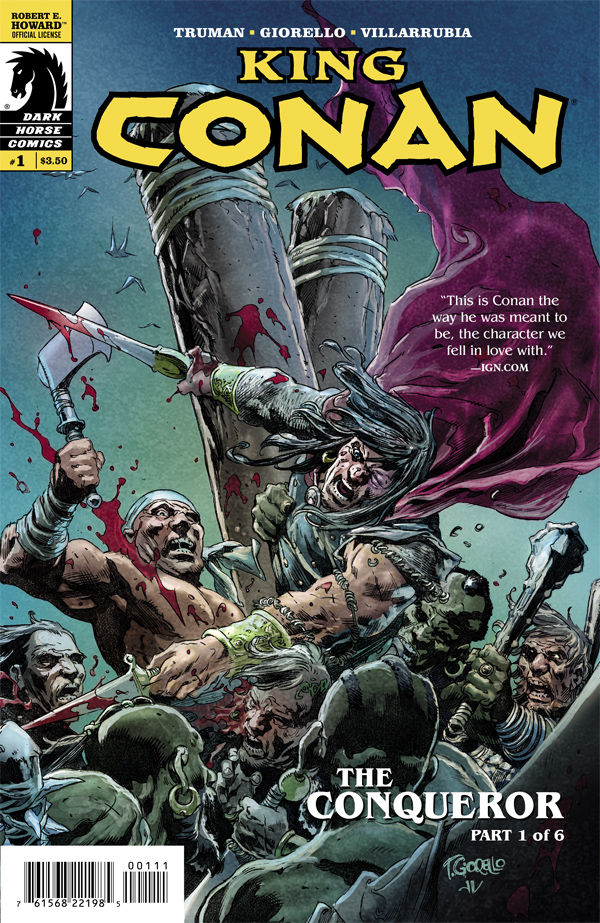 Arc, Conan after some time has now tracked Beloso and the jewel down to Messantia. .[spoiler show=”Story Spoilers” hide=”Story Spoilers”]The kingdom of Messantia is know for its trade and Conan has figure that if Beloso is to sell the jewel it would be here, so in order to find more info about Beloso’s whereabouts he sneaks into Publio’s villa and demands him to help find Beloso, Publio agrees to help Conan but not before secretly stating he’ll get rid of the cimmerian once and for all. At the same time a group of assassins set to capture or kill Conan have arrive, when publio returns he tells him that Beloso is sleeping in the house of Servio. When night falls Conan makes his way to Beloso’s room, when he arrives Beloso is laying dead with the mark of Set on his chest, Conan comes to realization that someone else is also tracking the jewel and maybe still be around, After noticing a ship leaving the bay Conan tries to follow but is confronted by some men Publio paid to take his life, outnumbered Conan is knocked out by the men and is left for dead. Meanwhile the assassins have confronted publio about Conan and where he may be hiding, At first publio tries to lie saying that he sent Conan to the house of servio but when one of  the men he sent to take out Conan returns and tells him and the assassins that they have killed Conan and his body lays at the seaport, the assassins then make Publio and the man show them where the body is laid. When they get to the port Conan’s body is no longer there and they notice a ship leaving, the issue ends with heavily wounded Conan rowing away on the boat and the assassins vowing to follow Conan to wherever seas he may go even to hell if needed.—————————[/spoiler]

The Conqueror starts off fast from the jump, Truman doesn’t waste anytime getting into it. The pacing is extremely fast, mostly due to the fact that its a continuation story, so character development and other things that involves a new arc aren’t really explored feature in this issue, So new readers may want to catch up on some back issues in order to figure what’s going on. that aside King Conan: The Conqueror Part 1 is a typical Conan issue, and i mean that in a good way.

Timothy Truman’s King Conan arcs are completely different from Brian Woods, While woods likes to show more emotions in his version of Conan, Truman keeps Conan at his purest and true savagery nature which in actuality is Conan’s true character. Artist and Colorist Tomas Giorello, Jose Villarrubia are back and bring that consistency we all come to expect from the both of them.

As expected in a first issue nothing big really happened, Turman uses The Conqueror Part 1 as a setup for the next issue so expect more in the next issue.