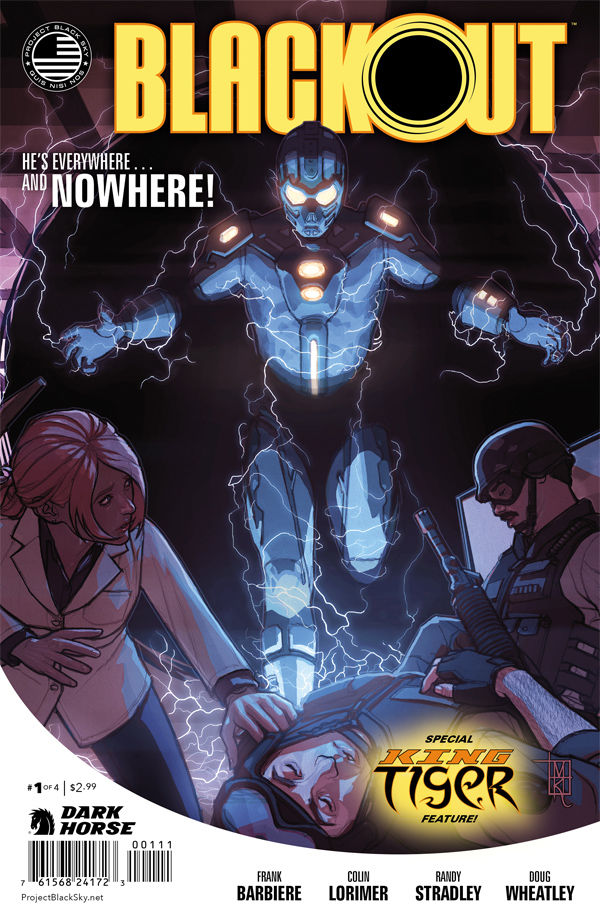 What happens when you have a missing persons, a battle suit that can travel through parallel dimension and a government willing to do whatever it takes to get their hands on it, you get Frank Barbiere’s Blackout!

Blackout starts off with the main antagonist Scott Travers describing the first time he used the suit to his friend Ash, we see that he had broken into a lab and was attacked by its security. During his explanation we also find out a man name Bob is missing, it looks as if this Bob character will have a huge impact in the story line along with a company called Avenir Microanalytics. Back in the lab Ms. Luca is going over the ordeal herself and how she was dragged through a portal by the terrorist aka Travers. Although she states that the man was not someone she had known, Luca explains that the man acted as if he was unaware of what exactly he was doing.  After leaving Ash’s house Travers decides to go his job which turns out to be Avenir Microanalytics.

One character to keep a close eye on is Cassius and his benefactor, there’s a panel where we see him watching the security footage of Travers break in and he receives a call form a mysterious person who seems to be the head man in charge, he or she tells Cassius that help will be on the way to help him find the suit.

The first issue ends with Travers using the suit to get inside the lab so he could find clues of Bob’s disappear, At the same time a group of masked man break in and are trying to steal the labs hard drives. A fight for the drives begins and we get to see just how the suit actually works, while the suit doesn’t seem to been weapon base, we do get a glimpse of just how powerful the dimensional travel abilities of the suit. When Travers uses the powers of the suit we see that when he’s in the parallel dimension the world around him is freezing cold and those how are in the present reality cannot see him. In the wrong hands this suit can do some serious damage which is why Cassius and his benefactor seem to want it so bad.

Finial thoughts: To be honest Blackout #1 is a below average first issue for the simple fact that this type of story has been written before. A guy finds a special suit made by scientist then uses it to stop a corrupt corporation who helped create the suit, Granted Blackout isn’t that simple of story it does have its similarities to stories like that. Don’t get me wrong I’m not saying Blackout is terrible comic, I’m just saying the basis of the story isn’t new and refreshing, which is why I think it will hurt its appeal for some readers. Blackout does have some good things going for it, one of them being the artwork, for one it’s very consistent and nicely detailed each panel is well structured and clean making it easy to follow.