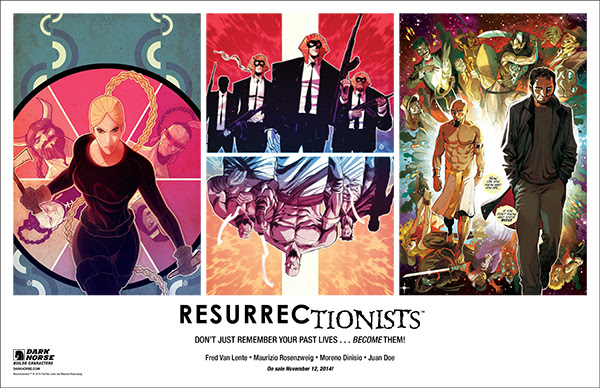 It’s all going down today, Dark Horse has their NYCC 2014 panel schedule live and we have the details below. Good fun is ahead as they celebrate Avatar, Goon and Aliens along with other company panels this year. Check it out and get to sorting out when and where you’ll be during the show before it’s a last minute frenzy.

Original creator-owned work has been a cornerstone of Dark Horse’s success since its earliest days. Join publicist Aub Driver—along with Gail Simone and Jim Calafiore (Leaving Megalopolis), Brian Wood (Rebels), Rafael Albuquerque (Ei8ht), Fred Van Lente and the team behind his new ongoing series Resurrectionists, Donny Cates (The Ghost Fleet), Matt Kindt (MIND MGMT), David Mack (Fight Club 2), and more—to discuss some of the most exciting comics of 2014 and beyond!

A fearful look at the 1950s horror comics criticized by Dr. Fredric Wertham, reviled in Senate investigations, and destroyed in public book burnings! These pre-Code comics, like zombies, are again walking to get you! Craig “Haunted Horror/IDW/Yoe Books” Yoe, Mike “Dark Horse” Richardson, Mike “The ‘Worst’ of Eerie Publications” Howlett, and Carol “Wertham Debunker” Tilley explore EC and other publishers, the censoring Comics Code, the Golden Age of horror reprints, and the TV shows and movies inspired by these scary comics!

Talk to actual working editors from Marvel, DC, Dark Horse, and more as they discuss the comics business. Learn about submissions, professionalism, and what it takes to make it as an editor. Support by Nicole Scalera. Hosted by Buddy Scalera of Comic Book School.

Dark Horse achieved one of its earliest successes with the 1987 publication of Aliens. Now, following the release of the highly anticipated Fire and Stone and Sega’s Alien: Isolation, we take a look back at a wild publishing history based on the frightening thirty-five-year-old franchise! Join Dark Horse publicist Aub Driver, along with Mike Richardson (president and publisher, Dark Horse Comics), Randy Stradley (vice president of publishing, Dark Horse Comics), Paul Tobin (Prometheus), Joshua Williamson and Chris Mooneyham (Predator), and a few surprise guests!

What started as a self-published sensation quickly grew into one of the most exciting books in the marketplace, with multiple Eisner wins, critical accolades, and a movie in development! Now, we get together some of the top writers working in horror comics to pay tribute to the one and only Eric Powell! Join Dark Horse publicist Aub Driver, along with Tim Seeley (Sundowners), Paul Tobin (Colder), Evan Dorkin (The Eltingville Club, Milk and Cheese), and Alex de Campi (Smoke/Ashes, Grindhouse) for a look at the past, present, and future of comics’ most lovable brute and more!

Dark Horse established itself in its early years as the premier publisher of licensed comics by continuing story lines from the big screen to the page. Now, this tradition is carried on through the most exciting video game tie-ins in the comics medium! Join Dark Horse publicist Aub Driver, along with the cast of top writers working on these titles, including Gail Simone (Tomb Raider), Paul Tobin (The Witcher), and former Star Wars writer Brian Wood, for an exciting announcement!