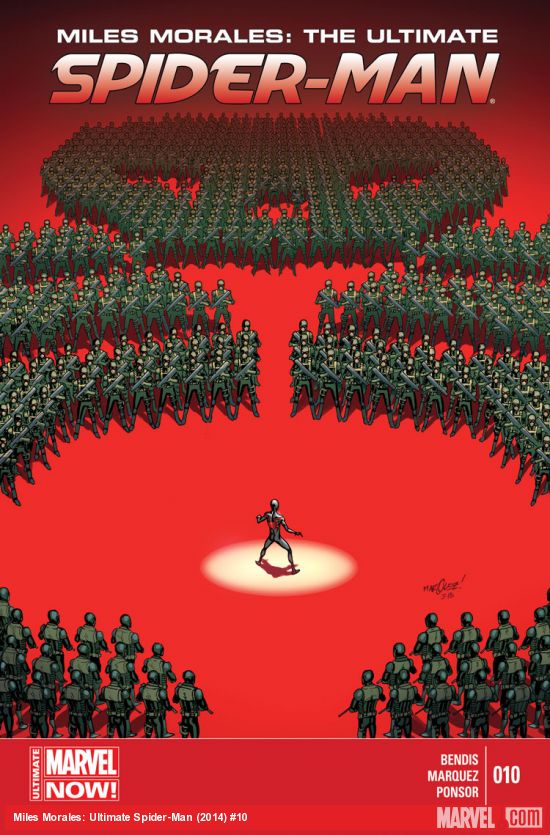 When Miles Morales revealed to his father and girlfriend that he was spider-man the reaction he receive was not what he’d expected, both his father and girlfriend turned away from him all for good reason, for one his girlfriend’s parents are undercover Hydra agents and the second being his father used to be a S. H. I. E. L. D agent. But at least one of the two most important people in his life came back, his father Jefferson return and is trying to work things out but how long will that secret affect him in the long run given who is brother was?. As for Katie there’s more questions, one important one being what will her parents do?

The issue starts off with Maria Hill and NYPD following lead which turns out to be nothing due to the counterparts knowing the bust was going to happened, back at Miles school his principle and father are talking about Miles future and how Jefferson is an important figure in his life now, you can clearly see miles father is still struggling with his sons secret. Meanwhile Miles runs into Sabertooth and Electro who are fighting over some cash the recently dead Norman Osborne had left, Miles intervenes once a bus full of innocent students are almost harmed, just when it looked like Spider-man would have a two on the one Cloak and Dagger appear and assist him.

Once it’s all over Miles asks Dagger for some girl advice which doesn’t turn out well so he decides to head over to Katie’s house and talk to her about but when he gets there Katie’s father answers the door, the conversation between them is a typical father boyfriend talk he gives Miles a glass of water and continues to talk, things change once Katie’s father ask how Miles received his powers, Miles is stunned and starts to fall asleep due to being drug.

Final thoughts: This was a setup character for the upcoming issue, although it didn’t start or look that way it, but that’s just a testament of Bendis’s writing, For the most part it looked as if this was going to be what I call “A push along” issue for which nothing really happens we get more character development and other things of that nature, The ending is where everything turns around and ends with a nice Cliffhanger.