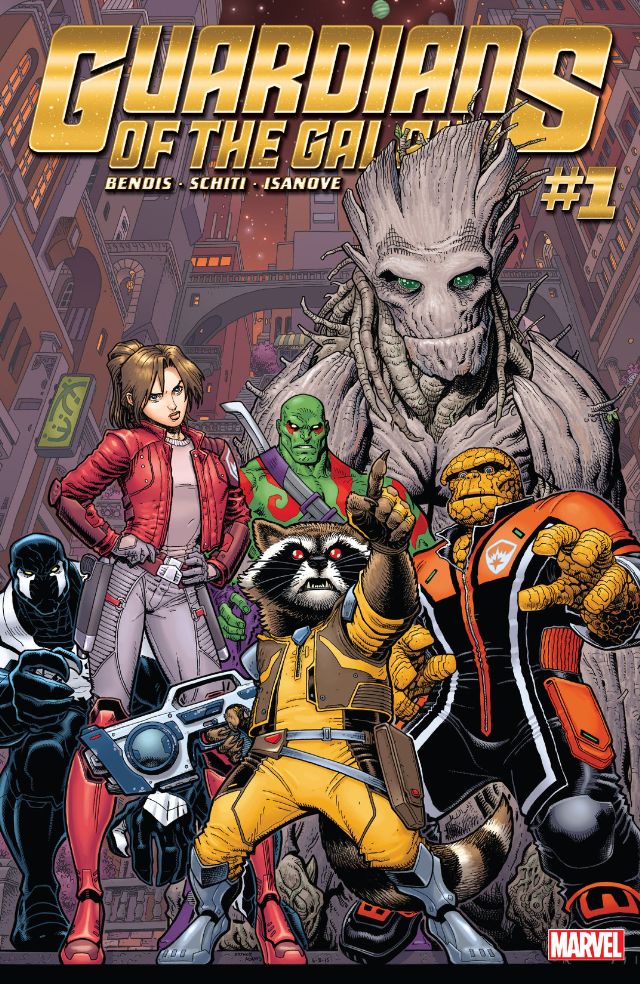 8 months after the Secret Wars the team of Rocket Raccoon, Drax, Venom (Flash Thompson), Groot, Thing and Star Lord aka Kitty Pride are the new Guardians of the Galaxy, with Kitty being the new Star Lord, since Peter Quill left the team to take over as the new king of the Spartax Empire. Rocket Raccoon takes over as the active leader, jumping into this issue I had my doubts of this new team mostly because members Thing, Venom and Kitty Pride, I feared that the trademark sarcasm amongst the members would be lost, but that’s not the case in this issue.

The issue starts with the team running into a single Chitauri ship, and some that classic quirkiness is shown when Rocket asks Kitty if she’s going to do the “Thing”, which turns out to be her phasing through laser fire while doing spinning pirouettes, when it’s all said and done the team makes quick work of the ship, but not before taking a mysterious item from the ship. Meanwhile on Spartax Peter is debating whether to leave his duties as King and head back to exploring the cosmos again, it’s obvious that Peter isn’t interested or confident on being the King of Spartax and is kind of looking for a way out.

Back on the Guardians ship the team is curious about the mysterious item but are afraid to open it, a funny moment happens between Kitty and Rocket when she suggest taking it to Peter without actually saying it. When the Group reach Spartax they are greeted by Peter, Rocket gives the item to him and Peter promises to them that his science council will take a look at.  The issue concludes when an object crashes down in front of Peter and company, the team becomes shock when they see that the object wasn’t an object but heavily injured Gamora who informs them that Hala the Destroyer of Worlds is here to destroy them, in the finally panel we see Hala dropping down full deck out in armor ready for battle.

Guardians of The Galaxy #1 (2015) is well balanced issue, granted there isn’t any character development due to it being a continuation of secret wars event. Bendis still gives you that classic Guardians humor despite having a new team who aren’t known for their humor. We get great insight of how different the team is without Peter Quill along with how he’s dealing with being king of Spartax, I always enjoyed the balance writing Bendis’s shows in his runs.

Artist Valerio Schiti illustrates all the emotions and expressions with pefection in moments where it should be demonstarted in, hopefully he sticks around for the entirety of bendis’s run