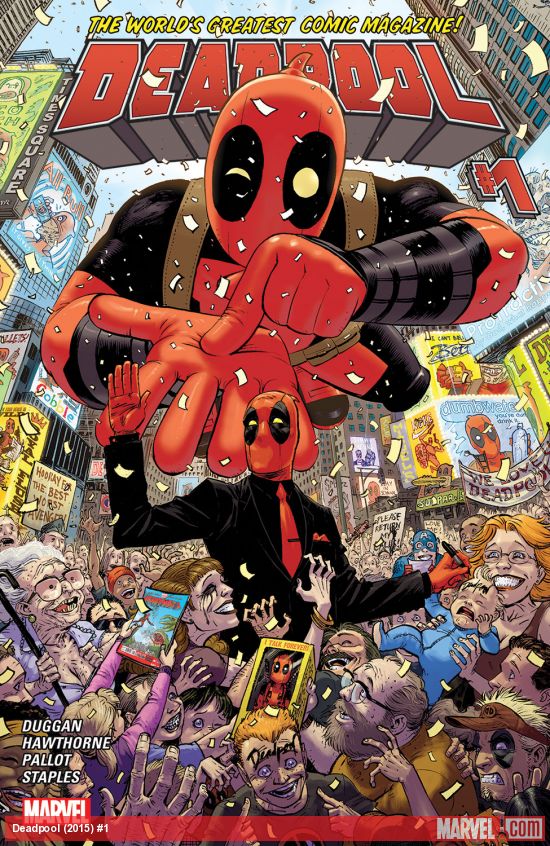 In Duggan’s Deadpool #1 we get to see just how impactful deadpools recent claim to fame has really changed the people’s view of him, his celebrity status has made him even more popular then Tony Stark aka Iron Man and Spider-Man, with his new fame comes more job opportunities, whether it be appearing at a bar mitzvah or interviewing for his own red carpet theater show, Deadpool has become a house hold name. Because of the new demands of being the new “IT”, Deadpool has started now “Deadpools Heroes for Hire” a clear reference to Luke cage’s “Heroes for Hire”, his team of heroes are similar to that of the Deadpool Corps. They take care of the missions and media appearances while he does whatever he wants, and throughout the issue we see, for most part how it works.

They also make reference of him being part of the Avengers, Duggan has intertwine this arc with the The Uncanny Avengers (2015) on going run, when Deadpool starts his interview at with George Stephanopoulos, Rogue walks in and is greeted by Deadpool and George, he asks her if she would like to comment on the recent Terrigen Mists outbreak to which she frowns and fly’s away. The Comedic aspect of the issue shine when Deadpool starts lieing about being in part of the Heroes for Hire, as Luke Cage and wife Jessica Jones look on,and angry Luke Cage calls Matt Murdock and asks if he can get in touch with the Punisher so he can take out Deadpool, other characters like Sabertooth along with his wife Shiklah, S.H.I.E.L.D. agents Scott Adsit and Emily Preston also see and comment on his interview, all of them are surprised at how sane Deadpool has now become and for 25 pages it looks as if Deadpool is new and improved, but that comes to question when we see him shoot Don Anderson in his office letting us know that his still the same old shoot first ask question later Deadpool.

Conclusion:  Although he isn’t the same insane Deadpool we are used to seeing, we do see that he’s still annoying and He’s still dangerous, what I enjoyed was the reactions of other characters when he was being interview, everything he saying was clearly a lie which I found to be the most funny part of the issue, as a whole this arc is starting off really well.