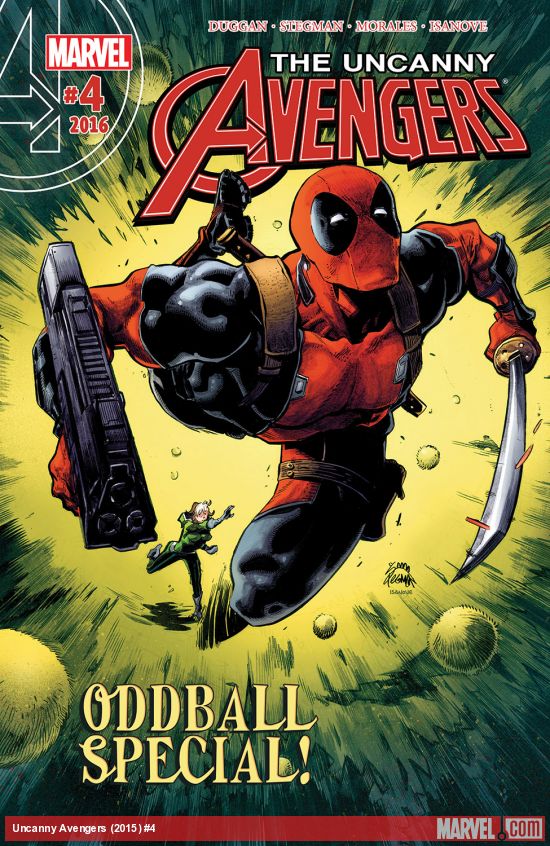 The Uncanny Avengers save Boston from destruction, but at what cost? The finale of the first arc has devastating consequences for one Avenger.

The begin of issue #4 we get a flashback of Emily Guerrero (Synapse) and her grandfather Ivan Guerrero (Shredded Man) when the Mist hits there home, Emily is confused and scared but Ivan is more acceptable to the change and is already dead set on becoming a hero, It just back to the present time and now Emily who is now Synapse is on her knees crying before Ivan aka Shredded Man asking him to stop the destruction and chaos he’s caused but lvan refuses and they start to battle it out, Meanwhile Deadpool and Rouge are taking out the infected animals, a funny moment happened when Deadpool asks Quicksilver to get him more weapons from his armory, instead he runs to a local gun store and brings not only the weapons but also the owner of the store, he and Deadpool shake hands and the two pick up guns and start taking out the creatures.

Back in the lab Torch and company are finishing up Cable’s serum for the Terrigen Mist outbreak, Quicksliver drops in and asks if the serum is ready and from there we see him blazing to every man and woman infected by the mist and giving them a shot of the cure. We jump to Cable and Rouge who are still fighting, cable gets a psychic flash and sees a vison of Synapse taking out Shredded Man causing a catastrophic event, just when it looks as if she’s going take him out Cable teleports in and takes her down before she can, the starts to reason with her stating that her actions will causes more damage to the city, Cable surprises them both when he instead shoots down Synapse, she goes on to tell him that she knows he still is the grandfather she always knew, but also didn’t want to die with the shame of what he’s done, so as a gift for his granddaughter he uses his powers to stop it all. But not without telling Synapse that his love for her is gone and the next time they meet he’ll have no mercy for her and with the last bit of his power escapes.  In fear of what the others my say, Synapse pleads with Cable to not say anything about her connection with the Shredded Man.

When Deadpool and the others arrive back to Boston, Cap asks Cable if he’s going to stick around, and Cable first says no, but quickly changes his mind when Cap tells him the next mission is to take down Red Skull and retrieve Professor Xavier’s brain.

The issue ends on what you could consider a cliffhanger when we see Hank Pym saving some people from an Alien attack, the interesting thing about rescue is that he’s not in his typical Ant-Man get-up but instead a new exo-design suit that he says is Ultron.

Conclusion:  There’s a lot of subplots within this arc that could turn into something interesting later on, but for right now it looks as if the main plot is over, we see a lot of emotional turmoil in Synapse, at one point she gives up physically because the emotional drain, her character development and story was the focal point in the issue, with that said I’m curious to see where Duggan takes this story now that the big bad is out the picture.