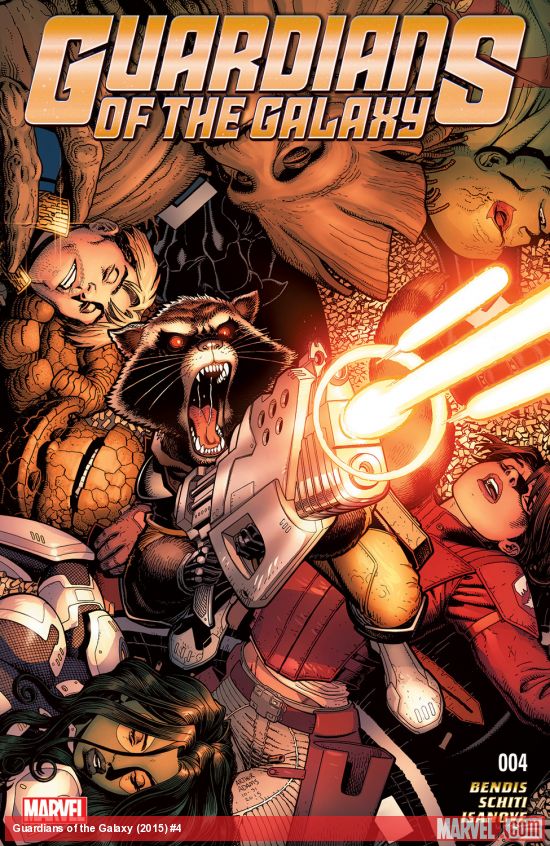 A new threat to the galaxy has emerged. His name is Yotat the Destroyer and he will have blood

The issue continues with Hala the Accuser’s hot their trail Gamora buys the team time by jumping at Hala to keep her from catching them, Peter and a few others are shocked by Gamora’s actions and want to go back and save her but Rocket is against it reminding them that they barely got away, after quick debate the team decides to go back and save Gamora in the after math of that team is divided on whether they should go back and save her. Back on Spartax Hala is given Gamora a serious beat down, just when it looks like she’s going to finish her off the rest of the team arrive and being to fight Hala back, Peter tries to reason with Hala saying that his father was the one who destroyed her planet not him, but to Hala it doesn’t matter and she continues to attack them, anticipating Hala’s answer the team executes one last plan by having The Thing surprise attack from above.

With Hala down the for count the team started to relax a little bit, Peter and Kitty share a moment, with Kitty stating that he can finally fix his planet and their relationship, but that is short lived when Yotat The Destroyer of Destroyers arrives claiming to want revenge as well.

Conclusion: Guardians of the Galaxy #4 is has all the things a Bendis written comic is known for, I always enjoyed his character dialog and interactions whenever there’s multiple characters, he makes sure that every character is present at that moment and not a lot of writers do that, some writers don’t, a lot of times it seems like they forget to include the secondary characters in crucial moments of the story, at last Valerio Schiti deserves the equal amount of praise as Bendis, his clean and very detailed art style makes for a dam near perfect comic. While it may come off like I’m biased towards Bendis I assure I’m not, I’m just given him and the people working with him on this run there proper praise