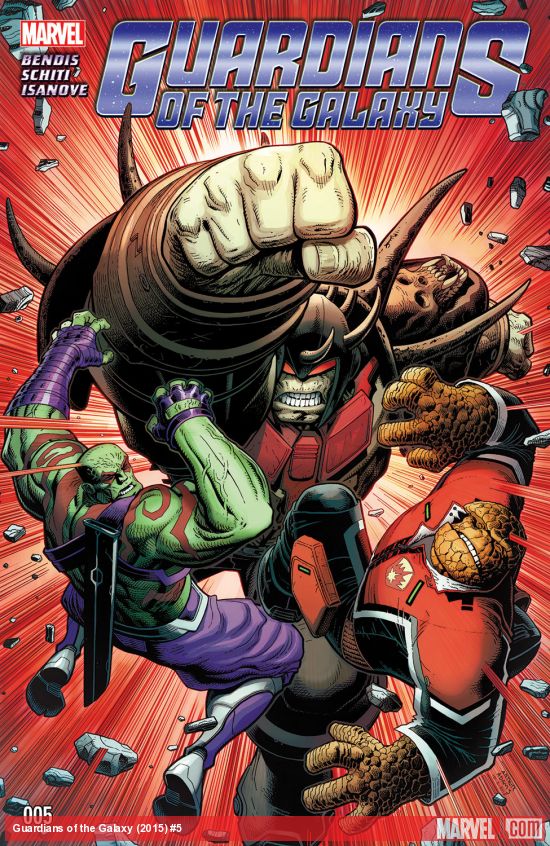 Last Raccoon standing! The Guardians face their toughest battle ever and aren’t going to make it out the same way they came in!

Things continue to get worst for the Guardians, after barely surviving an attack from Hala the Accuser, Peter and company are again attacked but this time by Yotat and like Hala he’s hell bend on taking out Drax and the other guardians, Peter doesn’t understand why Yotat is attacking them and he tries to reason with him but Yotat isn’t having it, but kitty gives us some insight of why Yotat is so gun hoe about killing them. 3 months ago the guardians where on Knowhere when they ran into Yotat for the first time, He was extorting some local traffickers when Kitty Pride steps in and Drax attacks him for behind and Rocket blast’s him with a rocket and like that the fight ends. We also get an appearance of the Knowhere Corps, they come and take Yotat away.

Back in the present time Peter finds Gamora and calls for medics to come take her, we then get a brief glimpse of baby Groot, Meanwhile Peter and the council members are discussing the fate of Hala and Yotat, Peter becomes angry when the council agrees to give Hala back to the Kree and place the blame of the attack on Spartax all on him, they try to arrest him but Kitty phases him out and they escape Spartax. Issue ends with Annihilus and Brood Queen hinting that their plan of having Spartax over throw Peter was a success and now is the perfect time for them to make a move.

Conclusion: This was a closing of the first many subplots in this arc, while it didn’t have a crazy plot twist or conclusion, it did bring back Peter as full time member of the team. The question now is, will he take over as leader? And will he take the mental of Star Lord again?.