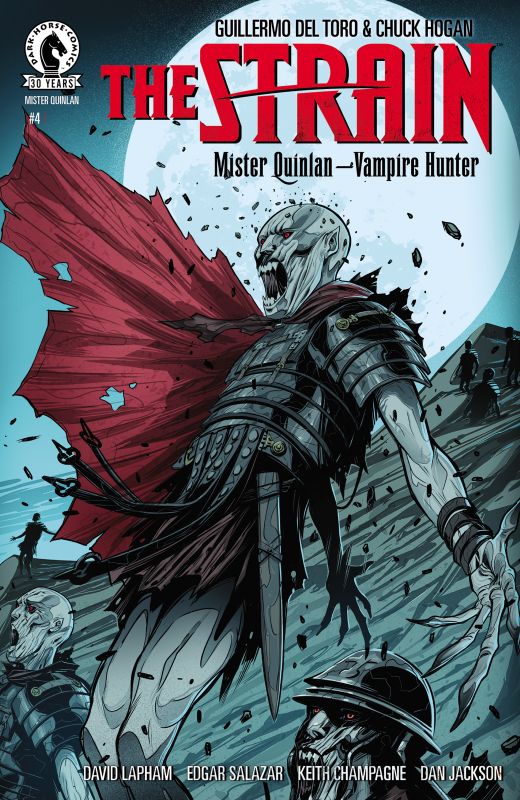 better as a graphic novel, The Strain has always been a must-read series and this continues to deliver.

After being confronted by a mysterious Vampire, Quinlan is given an ultimatum, either help them take out Thax are be taken out himself, after agreeing the mysterious Vampire assigns an agent with Quinlan, the agent is a human name Decimu. The two are given a dangerous mission by Caesar in which they must intercept a legion in carthage, what makes the mission so dangerous is the Desert they must cross.

With little chances of survival Quinlan, Decimu and company make way, and not long during their travels the men start to break because of the heat. After taking shelter Quinlan and Decimu take a minute and talk, we find out Decimu’s reason’s for why he follows the mysterious vampire’s orders. Later during the night Marcus, a man part the legion Quinlan informs him that 30 men have gone missing after drinking all of the water rations, Quinlan notices a broken pottery in which the water was in, he’s shocked when he finds the parasites that carry the vampire infection were inside with the water.

Knowing the missing men will soon turn, Quinlan and Decimu push the men to get as far away as possible because they know the newly turned vampires would be hunting them down fast.

With the missing soldiers now hunting them Quinlan and company decide to stand their ground and take on the vampires, the fight lasted only an hour, but the causalities were heavy, they had lost over 100 men to and now only had 60. With sun up Quinlan and Decimu come up with a plan to find and attack the vampires while they sleep underground, Quinlan knew the plan was certainly death to them all they continue.

Once they reached the layer, they attack the vampires as they sleep, although they had the upper hand by catching the infected off guard, they still couldn’t match the strength and numbers of the vampires and ended up losing all of their men including Decimu who somehow got infected during the fray.

Again, Quinlan finds himself along wondering the edge of the desert and comes across a Berber army along with its King, without hesitation Quinlan races towards the army with nothing to lose and for a moment he was holding his own but with so many men attacking him he’s taken down fast and looks to be on the verge of death when the issue ends

Conclusion:  Nothing has changed for Quinlan he continues to struggle with humanity and not in a since of danger but of loss, Decimu was a true friend too Quinlan but he ended up losing his life in battle against the vampires, I wouldn’t blame him if he decides to view the world like Thax or like the ancient ones, the guys been through a lot and now he seems to be on his way of losing his own life. But some good was found out of all the drama, he discovered a new ability he can use if he can survive this latest Conan like predicament.