In the last issue, we left off with the Teen Titans finding and breaking Robin 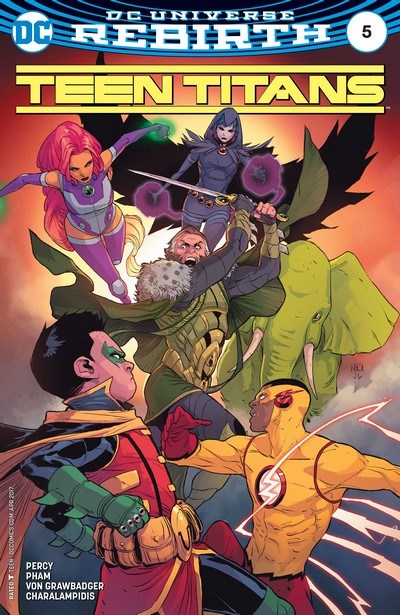 (Damian Wayne) free from his cell Ra’s al Ghul’s teen assassins Demon Fist put him in, and like classic Damian fashion he blows off with arrogance, I like that fact that Damian still struggles with his old self, it makes his character more interesting, especially when he and Mara confront each other, that is when you see how much has character has changed from when he first arrived, while Mara looks for her grandfather’s approval Damian sees his grandfather for what he is, and that’s crazy mad man who’s willing to use his own family to achieve his goal, When Ras and Mara are together he shows no empathy towards her.

The Demon Fist on the other hand realize this and start to question everything the League of Assassins has taught them, when Damian and company confront them, he informs them of how they were stolen from their families and raise to serve Ra’s. The members of Demon Fist question Ra’s about what Robin has told them, Ra’s doesn’t deny any of it, instead he has the league of assassins attack them. Together the Teen Titans and Demon Fist take out the League ninjas with no problem, at the same time Damian goes one on one with Ra’s, and actually holds his own against his grandfather, the rest of the Titans jump in to help Damian which causes Ra’s to retreat, throughout the fight Mara seems to be conflicted on what she should do, Damian tries to convince his cousin to come with him and for a second it looked like she would have, but Ra’s al Ghul intervenes and takes Mara with him as he escapes.

When it’s all said, and done the Teen Titans and the members of Demon Fist say their goodbyes to one another and everything seems to be good, but then Batman appears and questions Damian about the events that have just transpired, confuse of his father’s appearance Damian asks his father how did he know where to find him and its hinted that Damián’s pet bat was the reason, the issue ends with Batman asking Damian to return to Gotham with him, but Damian decides to stay and be part of the Teen Titans. In the final panel 3 months has past and we see Damian is standing on top of the Titan Tower alone, that’s until the rest of the team joins him, and together they look over the city of San Francisco

Conclusion: I really enjoy Benjamin Percy’s run with the Teen Titans, there’s a good amount of character disposition and action so far, and with Ra’s al Ghul conflict over I’m looking forward to what’s coming next in future issues