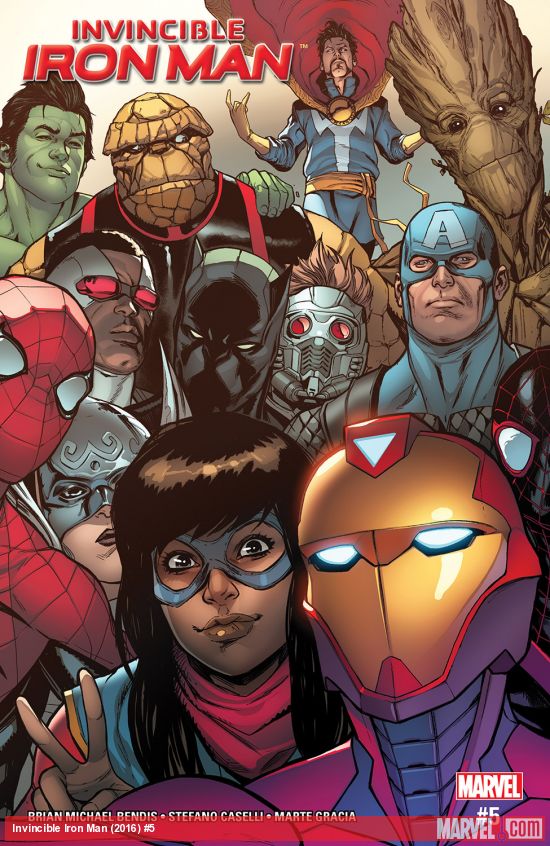 Bendis continues to slowly establish Riri Williams as the new Iron Man, we are giving so good character development so far. Bendis is showing us how someone so young and smart, when put in situation where there giving so much power and responsibility start to question his or hers future.  Riri comes off as someone who’s not truly fully aware of what being a superhero brings. Things like accountability and responsibility are not important right now, but let’s be honest, what teenager is.

After saving Pepper Potts from Tomoe and the biohack ninjas, she is approach by Sharon Carter of S.H.I.E.L.D., she is surprised at how capable Riri is with the armor and attempts to recruit her. Of course, Riri denies the offer which causes a brief spat between the two of them, it’s because of Shields miss use of their power in the past that a lot of people view them as the real-world NSA.

A twist at the end issue or perhaps the overall story shows Tony Starks Virtual projection is talking with Friday. It’s revealed to us that he’s not intelligence coding, but more of a digitized consciousness of the actual Tony Stark. Friday asks about Riri Williams well-being and the Tony Stark AI gives a very Ultron like response towards humans.

Conclusion: This issue was pretty solid, we got more character development for Riri, and that’s always good. But the most intriguing them in this issue is the talk between the Friday and the AI Tony Stark. While it’s hinted that the AI system is becoming another Ultron, I doubt marvel would go that route again, but then again this is Marvel where talking about so it could happen. So far, the introducing of Riri Williams as the new iron man going good I hope Bendis continues to focus on her development.