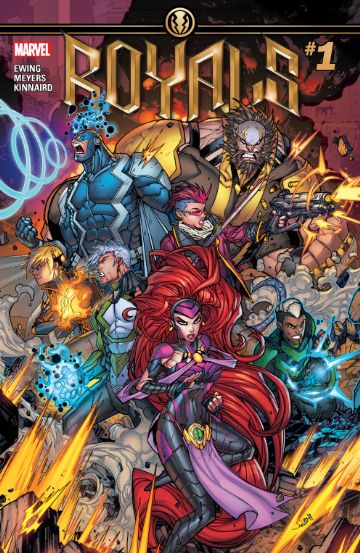 much has changed for the inhumans. With the Terrigen Mist destruction, the future of the Inhuman species is in danger.

The issue starts off five thousand years in the future, we are introduced to an unknown inhuman claiming to be the last of his kinda. Through his monologue, he starts to explain the downfall of Royal family. A lot has changed since the IvX, Iso has become the new Inhuman leader, while she is appointed leader she still addresses Madusa as her queen.

On Attilan, the inhumans are greeted by Noh-Varr aka Marvel Boy, he claims to know a secret about them, a secret that can save the inhuman species. If they want to know this big “secret”, they must travel to Hala the Kree Home world to find out. Medusa is the first to agree, she feels the family has let its people down and therefore should be ones to make it right, after a brief disagreement with ISO over the new mission, all of the royal family agrees including new inhuman member Flint.

Knowing the difficulty of this mission each family member say their good byes to their loved ones, Crystal meets up with her daughter, Gorgon to his son, Swain and Flint do as well. When Medusa approaches Black Bolt, he walks away from her hinting at a potential fallout in the near future between them.

At the end of the issue we get a shocking revelation from Medusa, she’s dying, form what we don’t know but we see its effects, as see her losing her hair.

Conclusion: Form the start you can tell Marvel Boy is using the Royal family for his own personal reasons, with its good or evil, we don’t know, but we do know it involves the being inside a container he’s carrying around with him. The relationship between Medusa and Black Bolt is on the rocks once again, I’m sure in upcoming issues we will find out why. And last but not least is the health of Medusa, what is causing this mysterious illness, why is it effecting her powers, and will she make through this mission.