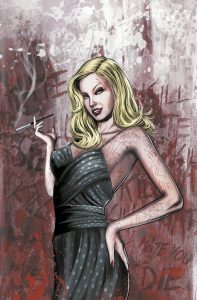 Normally I have a quirky intro here talking about the prior issue, I’m still at a loss, I mean it’s not like I’ve had time to reflect on that issue but that’s cold, actually in the immortal words of Ice-T, it’s cold McDonalds. Doctor Freust had some ups and downs, in her latest encounter with inmate eleven she had her mental wellbeing crushed without mercy.

Issue 5 brings in psychic remnants, mind reading, walks of shame, ultra experimental tinkering, and shattered dreams. We learn of new inmates, inmates we didn’t even know existed, and watch inmate eleven run the show on our dear Doctor Freust as she attempts to navigate a massive blow to her credibility and respect among the inmates and get her head back in the game. It’s a tricky situation but she does her best to survive another day in a hellish environment. Unfortunately just as she thinks she has a handle on things, a new challenger/ patient/inmate is set to arrive while the prison is in chaos.

Dan Schaffer spends a bit of time trying to piece together Doctor Freust, we see a shaken and eager doctor move to vindicate herself after being toyed with by inmate eleven. It’s not easy to rebound from a heavy mind game, let alone one created by supernatural psychic power. If she has the skills to continue though is entirely in the air, she’s eager but that might compromise her ability to get the job done.

David Miller steps up to the plate with this latest featured inmate, we see a range of emotion as confusion and reality set in, the lines between a self-made world and the facts create turmoil and rash outbursts that are well expressed on the pages. The character details certainly stand out and bring some added depth to the page.

Overall issue 5 of Malefic keeps the story rolling, it doesn’t just leave Doctor Freust as a fumbling mess hiding from herself and trying to escape. Instead, she tries to rise to meet the challenges ahead even if that means dealing with patients she could mentally shatter in the process.